Rain for around six hours on Friday not just left the entire holy city flooded, but also exposed monsoon-ready claims of the Amritsar Municipal Corporation. Irked residents raised questions on crores of rupees spent in the name of desilting.

It was an extremely heavy downpour. It was beyond the capacity of our existing system. As there is no storm water sewer in the city, so it takes a few hours to drain rainwater. We operated disposal pumps without any disruption. Rainwater was drained out within two hours because of desilting. Malwinder Singh Jaggi, MC Commissioner

The rainwater entered houses in low lying areas in Inderpuri, Islambaad and Kot Khalsa. As all major sewers remained choked, the rainwater remained stagnant on roads throughout the day.

Apart from this, the rain also exposed the true picture Heritage Street. The rainwater entered shops around the Golden Temple and devotees could be seen navigating through stagnant water.

Waterlogging is a regular problem. The rainwater enters our shops everytime and damages our goods. Today, rainwater damaged my goods worth Rs1 lakh. Similar situation was witnessed last year. Insurance companies do not cover such damage and nobody listens to us. It is a curse to have a shop on the Heritage Street. Rahul, a shopkeeper at Heritage Street

Commuters, especially motorcyclists and pedestrians, had a tough time. Several vehicles got stuck due to waterlogging, which further led to massive snarls in the city. Supply of milk and vegetables, too, got affected. 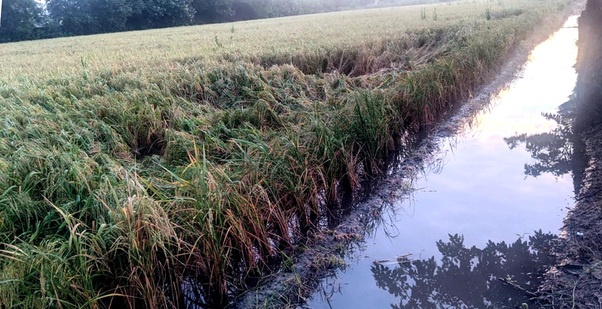 ‘No desilting by civic body’

Suresh Sharma, an RTI activist, alleged that the Amritsar Municipal Corporation claimed to spend Rs 12.10 crore in 2018-19 on desilting of sewers. Then Rs 40 lakh was sanctioned for each Assembly segment. Later, Rs 1 lakh was sanctioned for several areas in the city. There is no public record related to desilting. The office-bearers of the MC General House, senior officials and contractors were hand-in-glove and they embezzled the funds, said Sharma.

“There should be a vigilance inquiry. They have passed the bills, but not conducted desilting. If sewer lines were cleaned then how come the city turned into a pool?” asked Sharma.

According to sources, there is no check of administration on desilting work. “Generally, they park the super-sucker machine on a manhole and click pictures and send it to senior officers of the MC. There is no inspection of any department. No one measures the level of silt before and after the desilting is done. Noting is in public domain. Nobody responds to public representative in this regard,” said a councillor.

No power in several areas

Power remained suspended in several localities of the city. Amit Kumar, a resident of Veer Enclave, said a power cut was imposed at 9 am.

Heavy rain accompanied with high-velocity winds flattenend early grown varieties of paddy in parts of the district. Sukhbir Singh Sandhu, Block Agriculture Development Officer said, “Heavy rain in the area has partially damaged all early sown varieties. It will affect the colour of grain, which is on a maturing stage. The late sown varities such as 1121 are safe. The risk of bacterial leaf blight of rice plant is also there as water accumulates in fields, which results in spreading of bacterial diseases.