Helpless, father of 4-yr-old girl is full of rage for stray dogs 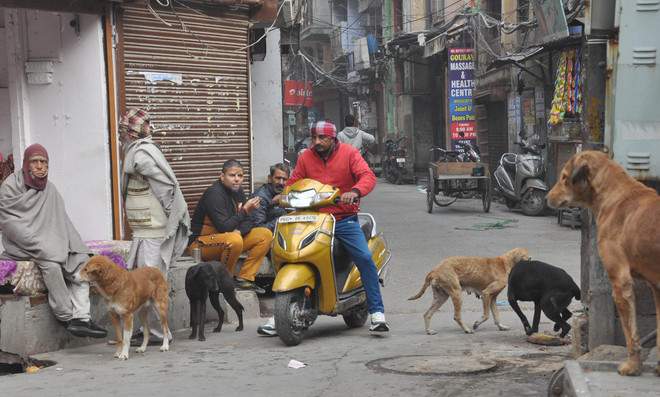 The Municipal Corporation has tried initiating its dog sterilisation programme four times in the last four years, but has failed every time due to lack of proper infrastructure. Photo: Sunil Kumar

When Murli Kumar, a migrant worker from Bihar, sees the same pack of stray dogs that killed Chanda, his four-and-a-half-year-old daughter on January 6 every day, he feels helpless and is full of anguish and rage.

The January 6 incident went unreported as the poor farm worker felt it was better to resign to his fate.

“I see the same dogs roaming around daily now. I am so helpless that I cannot even kill those dogs that killed my daughter,” said Murli, with a lump in his throat.

He said he surely wants to kill those dogs, but knows it was against law and he could be sent to jail for doing so.

“I want to kill those dogs, but would not do so as I have a family to feed. Who will take care of them if I go to jail?” Murli asked.

When questioned as to why he had not reported the incident to the police, he said: “What can I do? Everybody here knows about the incident. I thought it was better to take care of other members of the family instead of running for such things.”

Little Chanda was playing outside her accommodation at a rice mill in Malawali village, when a stray canine came running and went straight for her neck.

“It happened in a split second. I, along with four other persons, was standing a few meters away, when the dog pounced on Chanda,” said Murli. The child was rushed to a private hospital, where she breathed her last 15 minutes.

Chanda’s is not the only one who has been mauled by stray canines in the district. Earlier, too, such incidents, sometimes resulting in deaths or in serious injuries, have occurred. Kuljit Singh Malawali, an advocate from the same village, said: “The dog sterilisation programme should be initiated to control the population of stray canines.

With an estimated stray dog population of 40,000 stray canines roaming on city roads, sterilisation of dog is the need of the hour.” Over the last four years, the MC tried to initiate its dog sterilisation programme, but it failed every time due to lack of proper infrastructure. But try telling that to Murli and he says: “A dog is more protected than a poor man’s child.”