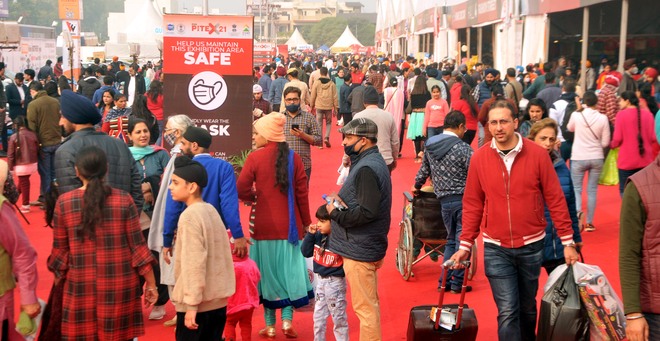 Exhibitors at the Punjab International Trade Exhibition (PITEX) were pleased to see a high footfall on the weekend. Photo: Vishal Kumar

Exhibitors at the Punjab International Trade Exhibition (PITEX) were pleased to see a high footfall on the weekend. It was a win-win situation for both exhibitors and shoppers as the exhibition was not organised last year due to Covid-19 restrictions. Lifestyle enhancing home decor items, dry fruits from Iran and Afghan caught the fancy of visitors. Naveen Seth, assistant secretary general, PHD Chamber, said on an average, five to six countries participate in PITEX. The chamber will approach the Ministry of Commerce and Industries to increase participation from foreign countries next time, he said. He said in 2017, a Reverse Buyer Seller meet of SAARC countries was organised successfully and a similar meet shall also be organised in the next edition of PITEX in 2022. Industrialists at PITEX appealed to the government to restart Indo-Pak trade as it would boost economy of both countries. RS Sachdeva, chairman, Punjab State Chapter, PHD Chamber and Naveen Seth, assistant secretary general, PHD Chamber put up this demand during an exchange of ideas on Sunday. A representation in this context would be submitted to CM Charanjit Singh Channi. They sought that industrialists and traders be allowed to visit across the borders, as there was huge demand of Indian products in Pakistan and vice-versa. They demand that the government should allocate fund for the proposed exhibition centre in the holy city. A long pending demand of the industry should be met. “To reduce automobile pollution, many provincial governments waived off road tax on e-vehicles to promote electronic vehicles. However, the Punjab Government was still charging road tax on e-vehicles,” he said. TNS