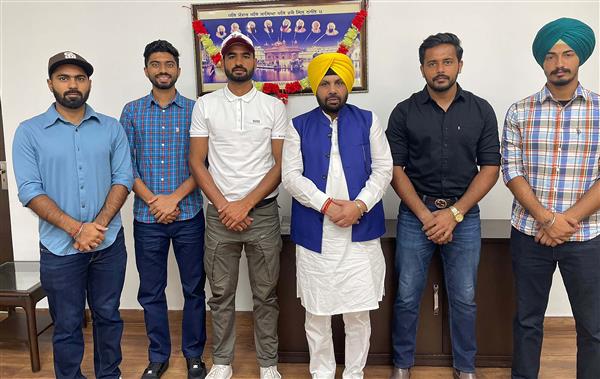 Young hockey players were on cloud nine to meet the players. The players, who hail from the district, were part of the Indian team that played in the final of the 2022 Commonwealth Games in Birmingham and won the bronze medal in the Olympics.

Four of these players Shamsher, Dilpreet, Gurjant and Harmanpreet have been bestowed with prestigious Arjuna awards.

With a view to encourage hockey, Harbhajan Singh ETO, Minister of Electricity, today met them.

The minister reiterated that the government was committed to help players in every possible way. He said apart from cash prizes to the winning athletes in the Olympics, government jobs are also being provided to them. He said sportsmen earn laurels for the country, so we also have a duty to do something for them.

He said sports tournaments were conducted from the block level to the district level under the flagship programme ‘Khedan Watan Punjab Dean’ to raise the level of sports. He said nearly five lakh players participated in these tournaments and the government also kept Rs 6 crore as prizes.