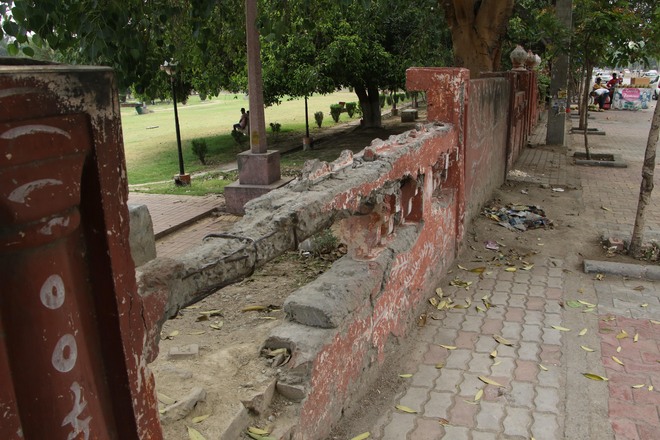 Crying for attention The broken boundary wall of the historic Company Bagh, which once had centuries-old rare trees, is in dilapidated state in Amritsar.

An open gym has almost become ‘invisible’ due to wild grass in historic ‘Chaali Khooh’ also known as Leisure Valley, which is being preserved under the Centre’s Heritage Rejuvenation Infrastructure Development Augmentation Yojana (HRIDAY) project.

The garden got its name from 40 wells located in the area roughly spread on 44 acres. This was the first of its kind waterworks project started by Britishers in 1904.

Besides conserving historic wells and structures, the Central Government was contemplating to open an interpretation centre here. However, the project was still far from completion while the wild growth all over the park speaks volumes about its maintenance.

Other major green lungs of the holy city, including historic Company Bagh, Skatari Park, Amrit Anand Park, Golbagh and green belts in different parts have not been maintained by the authorities concerned.

Nevertheless the authorities blamed suspension of maintenance works due to the pandemic.

Skatari Bagh, which was named after former MLA Raminder Singh Bolaria, has been in a pitiable condition. Though the government has passed projects worth Rs 14 crore for its facelift, including construction of indoor sports infrastructure and gym, besides other development works these were far from completion. The sewer adjoining the park was being covered under the Smart City project.

Majority of the parks, including those maintained by residents’ welfare associations now paint a picture of neglect. A visit to these gardens revealed growth of wild grass and weeds, dysfunctional fountains, broken lights and toilets.

Similarly, Company Bagh has been under the conservation for over a decade by different authorities, but the maintenance of its park lies with the civic body, which failed miserably. The historic garden once had centuries-old rare trees. A musical fountain was installed in the park near Maharaja Ranjit Singh statue after spending huge amount, but it’s lying non-functional for the past couple of years.