Was allegedly stuck in lift; family blames hotel mgmt for his death 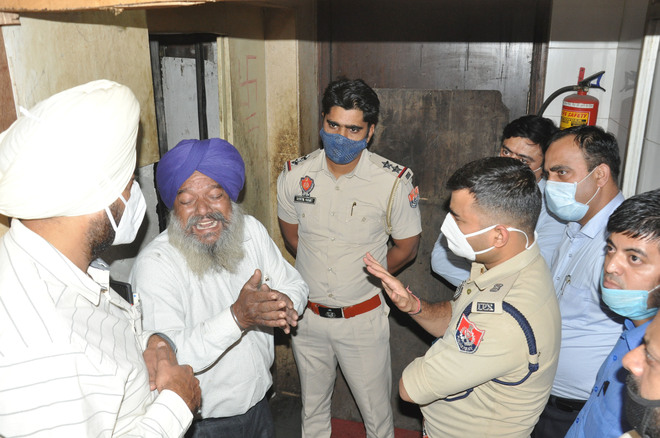 A relative of Satbir Singh, who died in a freak mishap, narrates the incident to police officials in a hotel in Amritsar on Monday. photo: Sunil Kumar

Satbir Singh (32), a security guard at a reputed hotel in the posh Ranjit Avenue area here, was allegedly stuck in a lift in a freak accident and died here this afternoon.

Additional Deputy Commissioner of Police Sandeep Malik said investigation was underway to ascertain the cause of death. The role of hotel authorities would also be looked into. He said CCTV footage of the hotel was being taken into custody for investigation.

The hotel authorities informed the police very late. All aspects would be looked into the case as further investigation was under progress. —Sarabjit Singh Bajwa, Assistant Commissioner of Police

Amrik Singh, a relative of the victim, said Satbir, a resident of Dhapai village and a father of six-year-old daughter, had been working as a security guard at the hotel for the past seven months. He said at around 12.30 pm, the family got a phone call from the hotel that Satbir had got injured in an accident. He was admitted to a private hospital.

Amrik said they immediately rushed to the hotel and found that his body was badly crushed. He said when they reached the hotel, they came to know that Satbir died on the spot as he was struck in the lift.

ACP Sarabjit Singh Bajwa said the hotel authorities informed the police very late. He said all the aspects would be looked into the case as further investigation was under progress.