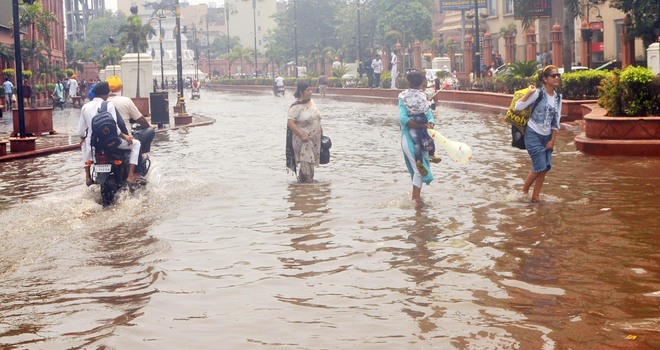 Rain lashed the walled city area this morning for around an hour exposing the inadequate drainage system of the internal city.

Waterlogging was seen in areas such as Katra Jaimal Singh, Katra Ahluwalia, Heritage Street and the bus stand area. The Municipal Corporation had conducted desilting of the main sewer lines in the walled city areas as the city had been facing the problem of waterlogging over the years. Rainwater drained out within an hour from most of the areas due to desilting of sewer lines, but waterlogging is yet to addressed in Katra Jaimal Singh and Katra Ahluwalia areas.

Varun Kumar, a shopkeeper in Katra Jaimal Singh area, said: “The issue of waterlogging has been addressed in some of the areas as water drains out a few minutes after the rain but some lines are still witnessed choking and roads get waterlogged due to rain.” The MC has conducted desilting of several major sewer lines to address the waterlogging problem in the tenure of Mayor Karamjit Singh Rintu.

“Water accumulated on the Heritage Street and some other streets around the Golden Temple. It is difficult to commute on roads and streets after rain. Waterlogging issue should be addressed on this multi-crore lane,” said Malkeet Singh, a visitor.

Mahesh Khanna, chairman, sub-committee on water and sewer lines of MC, said: “The visitors throw packing material, polythene and plastic bottles haphazardly leading to choking of storm sewer chambers on Heritage Street. As soon as the rain starts in the area, we send workers to clean the chambers and drain out water within a few minutes. Visitors should use bins. There is some issue at Katra Jaimal Singh as the 102-inch sewer line from Durgiana Basti to PNB School is yet to be cleaned. The tender has been floated under Smart City and it would address the problem.”

Khanna claimed that all disposal points are functional in the city and there is no such location, where water accumulates for more than two hours in the city.

Besides, residents got some respite during rain but the humidity level increased soon after.

Meanwhile, several localities in the outer areas were deprived of rain today.