Cash prizes worth Rs 2 cr, trophies given to over 268 outstanding players 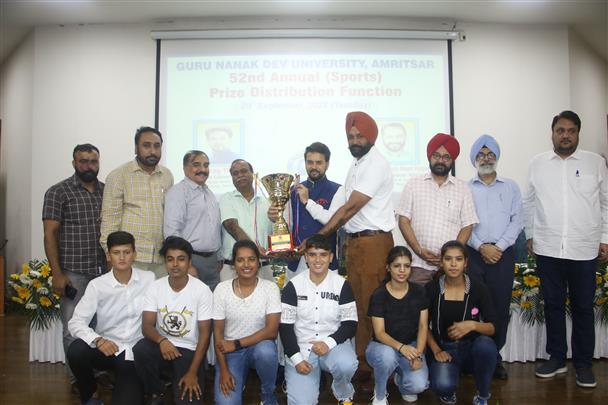 Thakur said Guru Nanak Dev University was one of the major sporting universities in the country. “When we talk about developing a sporting culture, it is such universities that prepare the groundwork for that to happen. The US, which has won most of the Olympic medals in the history of the games, has a strong university sports programme that nurtures young talent. We need to create more such centres that identify, nurture and support sporting talent in our country if we want to lead the global sports arena,” he said.

In the absence of Gurmeet Singh Meet Hayer, Education Minister, Punjab, who could not attend the event, Anurag Thakur also inaugurated two sports hostels, one for women and the other for men, under the “Khelo India” scheme and visited the sports facilities on the university campus.

He said, “GNDU’s record of winning the Maulana Abul Kalam Azad (MdsAKA) Trophy for 23 times speaks volume about the sporting infrastructure it has.” While speaking about the focus on building sports infrastructure at ground level, he said that their focus on women athletes. “We are conducting dedicated Khelo India Women’s Leagues across nine disciplines – hockey, archery, weightlifting, cycling, boxing, swimming, wrestling, volleyball and judo. More than 23,000 women athletes will participate in these competitions,” he said.

Vice-Chancellor Dr Jaspal Sandhu, in his address, urged Thakur to support the university in building strong sports infrastructure. “We need grants for re-laying AstroTurf (the only one in the region), a synthetic track, and an all-season swimming pool upgrade,” he said. The VC also requested him to set up SAI’s centre of sports excellence in the university.

Anurag Thakur is an alumnus of GNDU as he studied in the university-affiliated Doaba College, Jalandhar, fondly shared memories of his sporting days as a student. Sharing stories of his playing days as the captain of the Punjab under-16 and under-19 cricket team, Thakur said their favourite off-field activity after a hard practice or game session, would be to eat poori-aalo at Kanhaiya’s and then a tall glass of lassi at Munim di Hatti. “We would also go to Kesar Dhaba for a hearty meal. Now, sportspersons have a lot of facilities, but during our time, we used to travel in general compartment of trains,” he said.