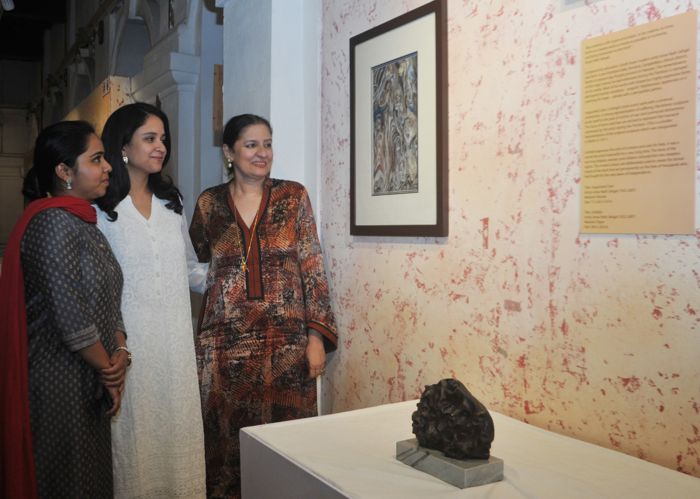 The two of Amar Nath Sehgal's most acclaimed artworks at the Partition Museum in Amritsar on Wednesday. Photo: Vishal Kumar

In 1961, when the Pakistan cricket team led by their captain Fazal Mahmood toured India, Prime Minister Jawaharlal Nehru gifted the team a bronze sculpture titled ‘The Cricketer’ as a goodwill gesture.

This sculpture later become an iconic symbol of goodwill gesture between the two nations. The creator of the sculpture, artist Amar Nath Sehgal, attained the status of being one of most celebrated South Asian artists of his time. Mandira Row, resident curator, Amar Nath Sehgal Private Collection, has also documented the historic moment in her book, 100 Years of Sehgal. “Critics have also called him a ‘Messenger of Peace’. The Cricketer, a sculpture made in bronze and weighed at 32.66 kilograms, was presented by former PM Jawaharlal Nehru to the Pakistan cricket team during their first tour in India, led by Captain Fazal Mahmood and manager Dr Jehangir Khan in 1961,” she writes.

“This gift was viewed as an iconic milestone for peace considering the turbulent relationship both countries share. The Pakistan cricket team played against local teams as well as the Indian national team,” shared Mandira, who was in Amritsar at the unveiling of two of Sehgal’s most acclaimed artworks at the Partition Museum. Celebrating the centenary of Amar Nath Sehgal and commemorating 75 years of India’s Independence and Partition, these works will be displayed at the Partition Museum. ‘The Cricketer’ is currently displayed at the second Partition Museum being set up in Delhi.

“This is an important milestone for The Arts And Cultural Heritage Trust, which is building up a collection of artworks from senior artists of the period and the display at the museum includes artworks by Satish Gujral, Krishan Khanna and SL Parasher, as also later artists like Arpana Caur,” said Bindu Manchanda, founding trustee of Partition Museum, who was also present at the unveiling.

Relatively lesser known in this side of Punjab, Amar Nath Sehgal, was a physicist by education, He was born in pre-Partition India, formerly Campbellpur, Attock district, north of present-day Punjab province in Pakistan in 1922. He completed his education at Government College, Lahore after which he enrolled in evening classes at the Mayo School of Arts, also in Lahore. He passed away in 2007 and was awarded Padma Bhushan posthumously in 2008.

“He had witnessed the pain and tragedy of Partition very closely during the time and these works are a remembrance of the events. The sculpture in bronze titled ‘Anguished Cries’, is considered his most iconic works and the first one, the original, was unveiled at the Berlin Wall in 1971 and another one in Vienna. It depicts the pain of victims of violence in the aftermath of Partition, with the screaming faces personifying the sufferings of people, who got displaced and lost their loved ones. Similarly, the painting ‘Untitled’ expresses the echo of screams and cries of help, with the faces symbolising the women and children, who were massacred,” said Mandira.

Mandira has been managing and archiving works by Amar Nath Sehgal at the museum created at Sehgal’s home studio in Jangpura, Delhi. She shared that his body of work is vast and acclaimed, his style being unique and centred around Partition. His works are displayed in public and private collections all over the world like the Musée d’Art Moderne de la Paris, the 20th Century Museum of Vienna and Berlin, the Israel Museum, the National Gallery of Modern Art and the White House, about which Mandira shared an anecdote. “Amar Nath Sehgal went to present his sculpture titled ‘Conquest of the moon’, to President Nixon, to celebrate the first landing on the moon. It is still displayed at the White House,” said Mandira.