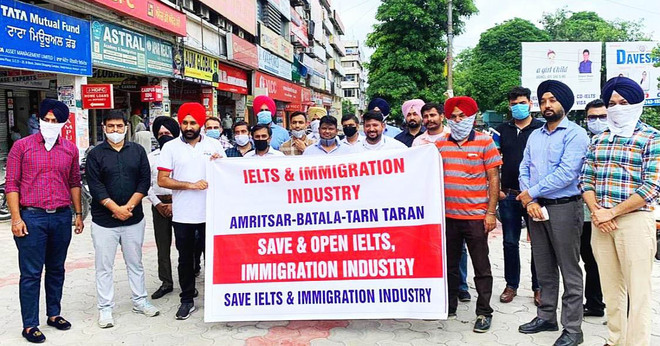 Owners of over hundred IELTS and tuition centres here have urged the government to allow them to resume business, saying their livelihood has been hit hard by the Covid-induced lockdown.

Staging a protest here on Friday, they said they would hand over the keys of their offices to the Deputy Commissioner in the next week if the government failed to respond to their demands.

Kanwar Bikram, who led the protest, said: “We have also apprised leaders of the ruling party of the problems being faced by us and requested them for help.” He said they earned their living from the centres which they started after failing to get a suitable job.

“Now after becoming self-employed and even creating jobs for other youngsters like us, we have been forced to keep our business shut for the past three months,” said Bikram, adding that if buses could be allowed to operate, if too must be given permission to resume classes.

Another IELTS centre operator Arshdeep Singh said: “We have been paying huge amount as rent as stopping payments would mean we have to vacate the buildings. Our investments in bettering infrastructure are going waste.” He said licensed centers should be allowed to resume operations.

“We are ready to abide by all instructions issued by the government to contain Covid spread. We understand that safety is paramount but if restaurants and hotels can operate, why can’t the less-crowded IELTS centers,” he said.

The centre owners said they were finding it difficult to pay rent and staff salaries.