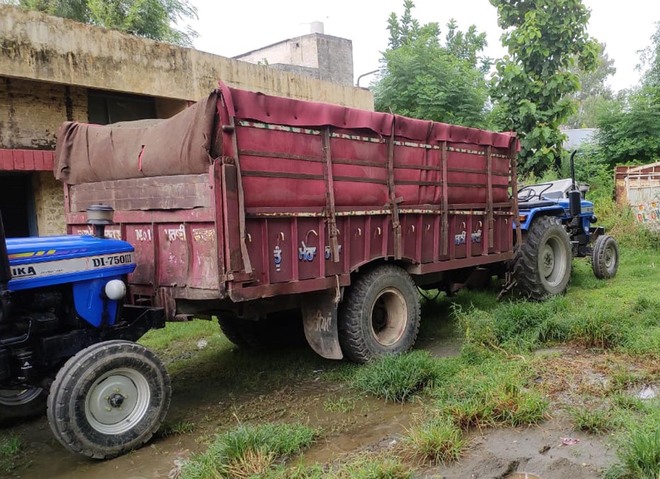 Incidents of illegal sand mining are rampant in the Ravi riverbed falling under Ajnala, Ramdass and Lopoke areas, if the recent seizures are anything to go by.

On Wednesday, the Mining Department nabbed Major Singh of Sarangdev village and Malkeet Singh of Hashmpura village, while their third unknown accomplice managed to give the slip. The mining officials seized three vehicles used in illegal sand activities from their possession.

On the statement of Rohit Prabhakar, Sub-Divisional Officer-cum-Assistant District Mining Officer, the police booked them under Section 379 of the IPC and Section 21 of the Mining Act. Rohit Prabhakar said he, along with a police party, was checking illegal mining and had set up a check point near Sarangdev village. They intercepted three Bolero vehicles being driven by the suspects. While the driver managed to flee, the other two were arrested. They could not produce any documents regarding transportation of sand.

Similarly, on Tuesday, the police confiscated two tractor-trailers with 8.5 hundreds cubic feet sand at Kakkrawala village. Drivers of both vehicles fled on seeing the police. The Rajasansi police have registered a case in this connection. In yet another case, the Lopoke police booked Kanwaljit Singh of Kot Sidhu village on the charge of illegal mining. The police had seized tractor-trolley laden with 300 cubic feet of sand during a naka at Sodian village. Kanwaljit had slipped away leaving the vehicles behind.

On August 24, mining officials confiscated 1,200 cubic feet of sand from three tractor trailers. Manga Singh of Dalla Rajputa, Lovedeep Singh of Bal Labbe village and Lovepreet Singh of Ballarwal village were arrested at a checkpoint at Jagdev Khurd village. The same day, another seizure of 2,500 cubic feet of sand was reported at Jhanjhoti village. The driver of the tractor trailer fled the spot, leaving the vehicle behind.

Satnam Singh, a Jamhoori Kisan Sabha leader, said illegal sand mining had been going unabated in the Ravi riverbed areas because of the politician-police-mafia nexus. “Only the governments have changed in Punjab, the nexus continues to thrive without a dent,” he said.