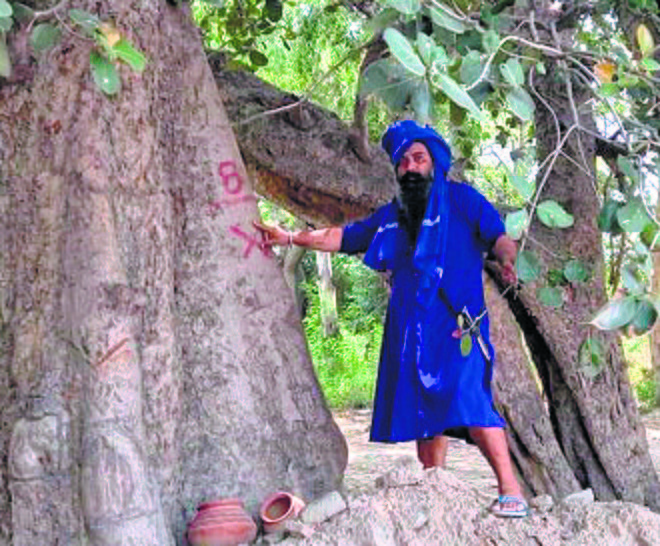 An activist shows cross marks on bohar & peepal trees proposed to be axed on the banks of Upper Bari Doab Canal, which was later cancelled after opposition from several organisations

Amritsar Deputy Commissioner Gurpreet Singh Khaira has directed the District Environment Committee to put up a large signboard indicating air purity at the District Administrative Complex to draw the attention of general public towards environment.

Addressing a meeting of the environment panel, the Deputy Commissioner said, “The administration is going to initiate measures to counter air and land pollution. Though this information can be found on everyone’s mobile phone these days, we are ignoring this important issue as we are busy in other works. A large signboard would be put up in the DAC in such a way that it would be updated online and in a place where the maximum number of people can see it. This would raise awareness of the environment among the general public.”

Khaira said,“We are also working to compile database of old trees in the city, including a large number of sacred trees (bohar and peepal). Whenever a tree is cut down, it comes to our notice, but if such data is generated, we can inform the general public by putting up a warning sign near such trees.”

The environment panel was recently constituted by the the Deputy Commissioner to monitor eco-issues in the city, which decided to set up small forests on vacant areas, including school and college grounds, focal points and areas under the Punjab State Industry Corporation.

The Deputy Commissioner asked landscape expert Dr Krishna Kumar to work out a strategy for relocating trees of the old office of the Irrigation Department.

Khaira assigned the responsibility of preparing the best landscape in the DAC to GS Bilga. He asked the committee members to include in their team such persons who would not be limited to mere advice or grievances, but would also devote their time to protecting the environment.