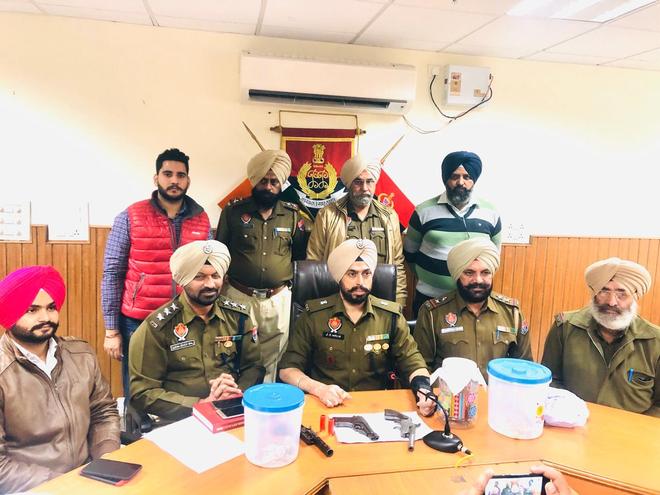 SP Jagjit Singh Walia and other officials with the seized arms in Tarn Taran on Tuesday. Photo: Gurbaxpuri

In their special drive against anti-social elements, the district police arrested five persons with 110 gram of heroin, four pistols, 19 cartridges, two cars and a huge quantity of stolen gold and silver ornaments here on Tuesday.

On the instructions of SSP Dhruv Dahiya, the SP (Investigation), Jagjit Singh Walia, told mediapersons that Baljit Singh Bulli of Jandiala Guru was nabbed by a team of the local CIA from Rakh Sheik Fatta village, 16 km from here. The police team recovered two pistols of .315 and .32 bore, 13 live cartridges, besides approximately 18 tola of gold and 339 gram of silver ornaments.

The SP said his five associates Avtar Singh Dani, Navdeep Singh Chintu, Sukhwinder Singh, Vishal Singh and Robin, all of Jandiala Guru, were absconding. The SP said all were associated with the infamous gangster Jaggu Bhagwanpuria who was behind bars. They have been booked under Sections 25, 54 and 59 of the Arms Act by the local Sadar police.

In the second case, the Sarai Amanat Khan police arrested Gurbinder Singh of the local Sachakhand road with a .32 bore country-made pistol and four cartridges from Bhuse village in the border area. The accused has been booked under sections of the Arms Act. The accused was sitting in a Swift car, which had no registration number. It had been seized by the police.

In the third case, the local CIA staff team arrested Gagandeep Singh Gagan of Gohalwar village with 10 gram of heroin, a country-made pistol and two cartridges. A case under sections of the NDPS and the Arms Act has been registered against the accused, informed SP Walia.

Meanwhile, the local Sadar police nabbed Rajanpreet Singh Rajan and Sarwan Singh of Mughal Chak Pannuan and recovered 100 gram of heroin from their possession. The accused were in a Swift car, which had been taken into police custody. — OC