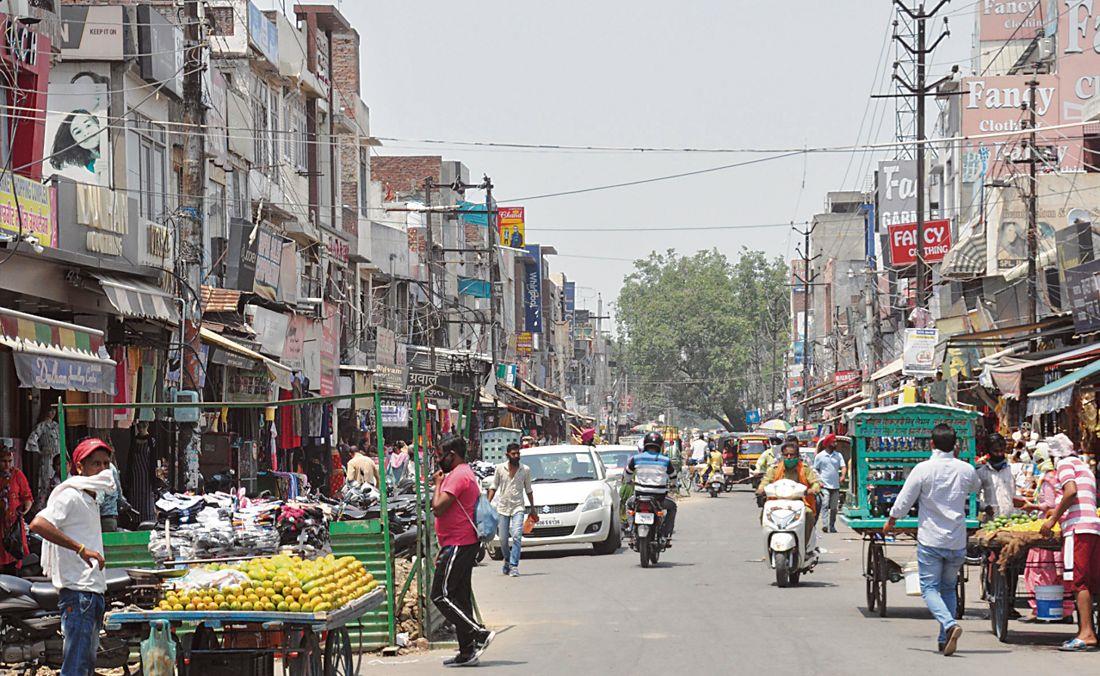 A view of Putlighar Bazar in Amritsar on Friday. Photo: Sunil Kumar

Quote: People themselves are responsible for the problem as they do not allow the construction of public toilets. Even when we try to construct urinals on government space, people in the market start opposing saying that a foul smell will start emanating from it and it will hurt their businesses.

The Putlighar market is one of the major cloth, garment and cosmetic markets in the holy city with hundreds of people from far-flung villages and localities visiting here daily.

However, people and shopkeeper face a peculiar problem. The market does not have proper public urinals. Shopkeepers and people are forced to urinate in the open in nearby areas like streets, which are less frequented.

“We have been here in the market for the past over two decades, but the government has failed to provide public urinals,” said Sonu, who runs a cosmetics shop in the busy market. Though many big shops in the market have constructed washrooms on the premises, but there are just two or three per cent of such shopkeepers.

“So is the case with the Putlighar-Islamabad road. Even the main GT road also does not have any public toilet,” said another shopkeeper Arun Kumar who has been running a photo-studio in the market for the past 25 years.

There is one public urinal, but that is also located half a kilometre away from the market. “The major problem is for women customers. Sometimes, they ask for the washroom and have to leave the shop in a hurry and look for public toilets. Sometimes, they prefer to return home making no purchases,” said Govind, another cosmetics shop owner.

A saleswoman of a garment shop, said, “Women workers also suffer a lot as there are no public urinals in the market. They sometimes have to urge shopkeepers in the neighbourhood who have washrooms in their complexes. “Men manage to urinate shamelessly in the open while there are no urinals for women and no authority take notice of it,” she said. “This is not the problem of the Putlighar area alone, but many old busy markets have the same story,” another woman shopkeeper pointed out.

The government has constructed many public toilets and washrooms under the Swachh Bharat Mission and under the AMRUT (Atal Mission for Rejuvenation and Urban Transformation) in the holy city, but many commercial markets still do not have the basic facility of public conveniences.

Municipal Health Officer Dr Ajay Kanwar said it people themselves were responsible for the problem as they were not allowing the construction of public toilets. “Even when we try to construct urinals on government space, people in the market start opposing saying that a foul smell would start emanating from it and it would hurt their business,” he said. “After objections, politicians also intervene and stop the construction of public toilets. People want facility but are not ready to give space. If they allow us, we can construct them within no time,” he added.