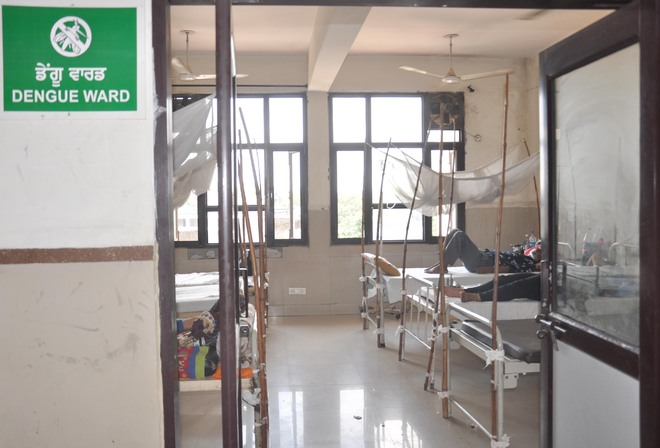 The increasing number of dengue cases in the district has set alarm bells ringing and the Health Department is taking measures to contain the spread of the disease.

The increasing number of dengue cases in the district has set alarm bells ringing and the Health Department is taking measures to contain the spread of the disease.

The district has reported a total of 61 dengue cases in last seven days.

With this, total 251 cases have been reported in the district during the current season. Dengue cases had witnessed a sudden spurt in the last week of August. The Health Department has already reported 134 cases in September so far.

While the department has asked the Municipal Corporation to conduct regular fogging in all 85 wards, it has also initiated extensive inspections in residential areas to detect dengue larvae.

“The general public must empty their air coolers, water pots and other items, especially kept in the open, once a week on Friday to prevent mosquitoes from breeding,” he said, adding that a meeting of the district dengue taskforce was held under the chairmanship of Deputy Commissioner to tackle the situation.

District epidemiologist Dr Madan Mohan said 503 challans have been issued after dengue larvae were found at various buildings in the city. He said in case a patient is diagnosed as a dengue case, he must increase his fluid intake and ensure proper rest to avoid complications.

He said dengue-causing mosquito usually bites during the day and proper precautions as mosquito coils, sprays, mosquito repellent creams, full sleeve clothes should be used to avoid mosquito bites. He said the Education Department has been roped in to create awareness about the disease, its causes and prevention among school students, so that they can pass on the information to their parents.