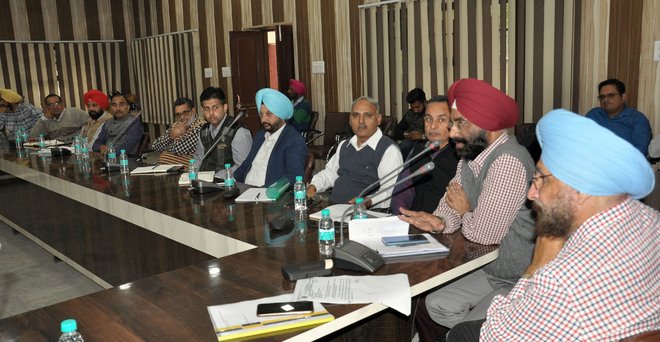 Industry leaders during a meeting with officials of the ESI and Powercom in Amritsar on Thursday. Photo: Sunil Kumar

A meeting to discuss issues of industry concerning Employees State Insurance (ESI) hospital and the Power Corporation was held in the presence of Additional Deputy Commissioner here on Thursday. Industry representatives Dr JP Singh, Kamal Dalmia, Pyare Lal Seth and others attended the meeting along with officials of the ESI and the Power Corporation.

The industry representatives raised the problems faced by the industry workers in getting treatment and thereon refund of expenses from the ESI Corporation. They stated that in view of the medical needs of all ESI card holders, the government should develop Amritsar ESI as model hospital.

Dr JP Singh said, “The model hospital will not only be beneficial for workers from Amritsar, but also for neighbouring districts.” He said the workers had to wait for months to get their medical bills cleared from the ESI. The industry representatives stated that though the ESI delivered funds to the state government in time, the later uses it in other works, which poses problem.

The industry representatives also demanded from the government to fill all vacant posts in the ESI hospital. They also highlighted the issue of costly power supply stating that though the government promised power supply at Rs 5 per unit, actually they have to pay around Rs 7.50 per unit.