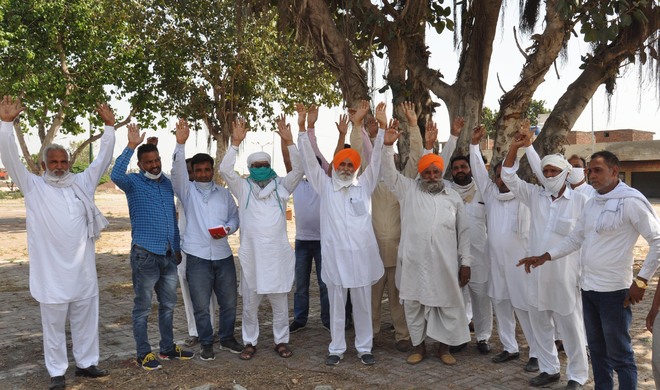 Farmers under the banner of the Kisan Mazdoor Sangharsh Committee (KMSC) blocked Amritsar-Ferozepur road near Chabba village to protest against the abrupt increase in prices of fertilisers, stricter norms for procurement of wheat crop and the state government’s alleged failure to present procurement related issues before the Centre. Sarwan Singh Pandher, general secretary, KMSC, said the state government has failed in presenting farmers in a proper manner. He said increased prices of fertilisers and cotton seeds would increase input cost, which would affect farming community. Pandher said the government has increased price of DAP by Rs 700 per bag and of cotton seeds by Rs 35 per packet. He also criticised the Centre for decreasing moisture limit in wheat to 12 per cent from 14 per cent. The government has also decreased the limit of broken and discoloured grains from 4 per cent to 2 per cent. Farm leaders said the Centre has started direct disbursement of payment to farmers to create differences among them and commission agents (arhtiyas). “The Central Government is trying to turn one section against the other to end the agitation. All those associated with agriculture are united,” said Pandher. The KMSC leaders said a massive rally would be held to demand repeal of the three agri laws. The committee also announced to organise protests at Ram Tirath, Kathunagal and Jallianwala Bagh on April 11, 12 and 13, respectively. — TNS

Will be conducted in 525 healthy volunteers.