There were nearly 2.5 lakh migrant labourers engaged in different fields in the district before March 2020. About 70,000 of them did not return after the unlock last year. It is feared that many more would not return if any help is not extended to them. 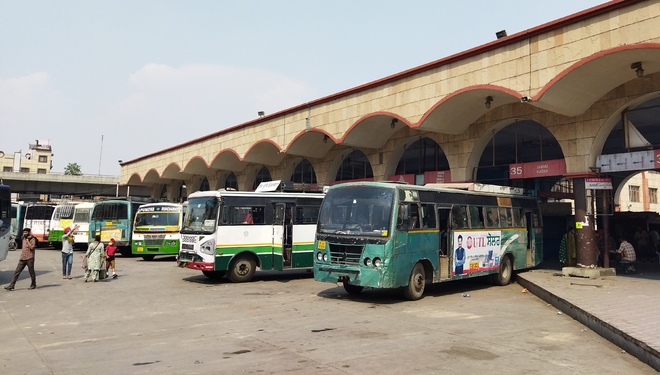 Migrants in the city have been returning to their native homes in the absence of work as well as non-payment of salaries.

Migrants in the city have been returning to their native homes in the absence of work as well as non-payment of salaries.

Working at a printing textile mill, Rishikesh, whose average monthly income is nearly Rs 12,000, has not received his salary for the past two months. Unable to find further work and fearing another lockdown, he along with his wife and two daughters is returning to his native village in Ayodhya district.

Vijay Kumar Vishwakarma, a migrant from Pratapgarh in Uttar Pradesh, said he arranged Rs 2,500 to buy a ticket for himself. Assa Ram, who earns Rs 12,500 per month, is staying back on the assurance of the proprietor of a textile mill that his over two months long salary bill would be cleared by May 15. Living in a rental house along with his family with meagre resources, he has no option but to wait for the much-needed cash to return to his native place in Motihari district of Bihar. Many private buses from Delhi, UP and Bihar have been plying the migrants back to their homes.

Ram Bhawan Goswami, General Secretary of the Uttar Pradesh Kalyan Parishad (UPKP), Punjab, stated that the parishad was receiving numerous calls from migrant labourers who were not getting their wages. He claimed that barring big industrial houses, 90 percent of the local industrial units were lying closed. In this scenario, labourers were heading back to their native places for want of work and not due to the Covid-19.

He said the parishad was dispatching a communique to Chief Minister Capt Amarinder Singh, seeking financial package for the migrants in the lockdown. He claimed that between 8,000 to 10,000 industrial labourers had not received their wages for the past nearly two months and 90 per cent of them were out of job, hence staring at starvation.

He claimed that there were nearly 2.5 lakh migrant labourers engaged in the district before March 2020. About 70,000 of these did not return after the unlock. He anticipated that many more would not return if any help is not extended to them.