Jobless due to Covid, he discovered his options to remain in reckoning 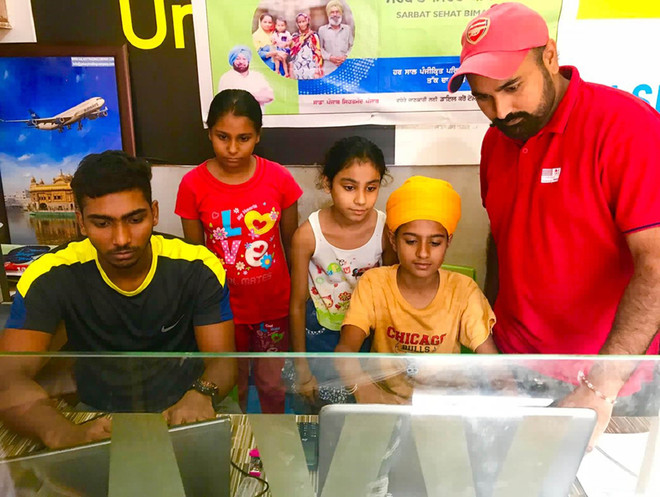 Sarbjit Singh Pinku of Butala town has weathered various storms in his life with his indomitable spirit.

Covid-19 and its ensuing circumstances once again tested his grit and determination which he faced by changing his profession to remain in the reckoning.

Father of two, his priority was to meet domestic expenses, besides footing the operational cost of his shop. Putting his air travel and money transfer business at the back, he became a Business Correspondent of the State Bank of India, aiding in opening saving accounts, fixed deposits, recurring deposits, cash withdrawal and deposits. He is daily registering nearly 50 transfers under various modes in the banking sector.

He also opened a common service centre updating Aadhaar cards, besides making the new ones. In addition, he runs courses for educating rural youth in operating smartphones and computers under the DISHA programme being run under the Ministry of Rural Development. It earns him Rs 300 per student from the Ministry.

Adversities keep testing him at regular intervals. He lost his father Tarlok Singh to liver cancer at a young age, prompting him to join the business to shoulder his family’s responsibility.

Cashing in on the craze of youth in the city going overseas in search for greener pastures, he even started an air travel business and was handling remittances through a private multinational company.

He soon consolidated his financial position. However, destiny took an ugly turn as a group of armed youth attacked his shop after pumping a bullet in his thigh and decamped with Rs seven lakh in October 2017. After months of investigation, police recovered Rs 40,000 from the looters. Due to the circuitous legal procedure and further expenses, he did not pursue the case.