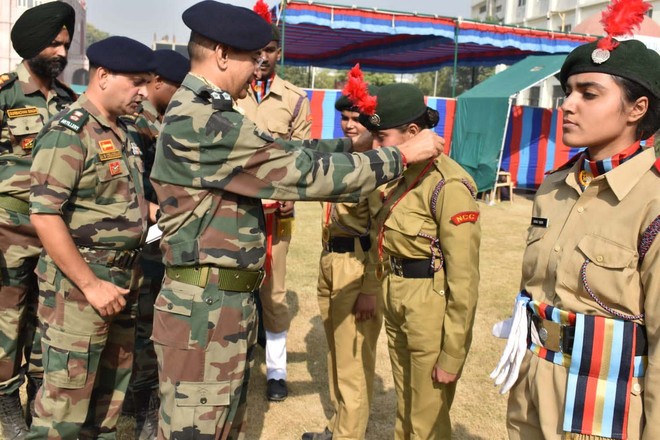 Amritsar: The joint annual training of 24 Punjab Battalion, Amritsar; 2 Air Squadron, Amritsar; and 2 Naval Unit, Amritsar, started at KCET. It will continue till November 26. The camp was inspected by Group Commander Brig Rohit Kumar. He addressed the cadets of all three wings and attended lecture-cum demonstration and aero-modelling show during the camp. About 550 cadets from various colleges and schools in Amritsar and other districts of Punjab participated in various activities. Cadets will be given training in personality development as well as map reading and drill. The aim is to inculcate a sense of unity, patriotism, teamwork and discipline.

A lecture competition organised by the political science department in collaboration with district election office was addressed at DAV College on the theme ‘Role of Punjab in Indian Independence and Indian democracy’. Shweta Thakur won the first position, Abhishek Sharma was declared second and Disha Mehra won the third position. Dr Rajesh Kumar, principal, DAV College, said maximum contribution during freedom struggle was from Punjab. He said Punjabis made sacrifices for the country’s freedom. He said watershed movements and big names among freedom fighters such as Bhagat Singh, Sukhdev, Rajguru, Lala Lajpat Rai, Udham Singh, Kartar Singh Sarabha and many others led from the front for the country’s freedom. Prof Surinder Kumar, head, political science department, said valiant Punjabis had inherited the spirit of self-sacrifice and patriotism from Guru Nanak Dev and other gurus, who waged a relentless battle against injustice, tyranny and oppression to safeguard human rights of innocent and helpless people. Urging students to take a pledge to make Punjab a vibrant and progressive state, Dr Gaurav Sharma, organising secretary of the event, said the state needed to be freed from evils such as drug menace and unemployment.

Global Group of Institutes organised an industry academic interface programme for the first year students of BBA, BCom and MBA in association with Bonn Group. The interface was held to give students a live hands-on exposure and make them aware of the ongoing trends in the industry and also to guide them in improving upon their employability skills. Organised with the prime objective of bridging the gap between academics and industry, the programme turned out to be a great success as 70 students participated in the interface and 23 students were shortlisted for the ongoing live project by the company. The project will cover important aspects such as brand awareness and management, case studies for quality control and quality improvement, value addition, basic marketing principles and consumer motivation among other things. TNS