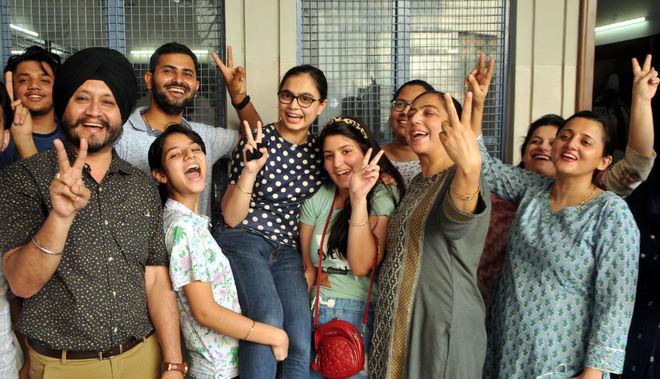 Kirtideep Kaur Marwaha (C), who got top position in commerce in the city with 99.6%, celebrates with her parents and friends on Monday.

Kirtideep Kaur Marwaha has topped the city with 99.6 per cent marks in the commerce stream of the CBSE Class XII examinations, the results of which were declared nationwide by the board on Monday.

A student of The Senior Study (II), she upheld the dominion of commerce in the city. She scored 100 marks in English, economics, business studies and 99 marks in accountancy and painting. Her aggregate total was 498 out of 500.

She has been a student of The Senior Study (II) right from the play pen. An intelligent, sincere and a fun-loving girl, motivation helped her excel in the exams. She has always been a good student and remained among the toppers of her class year after year. Clear in her thinking, she was sure of her goals and worked sincerely to achieve them.

She credited her teachers and parents for her outstanding success. They were always there to support and guide her. She is a good orator, poet, artist and actor as well. She was a member of the student council, a house captain and was a source of inspiration for her juniors because of her leadership traits.

Rajbinder Singh of Shri Ram Ashram Public School has achieved 98.8 percent marks. He had scored 93.8 marks in the ICSE board and thereafter he switched over to the CBSE for studying commerce in senior secondary.

He had opted for the commerce stream because it is one of the most popular streams and I was really keen on pursuing it. I had a knack for legalities and wish to pursue a career as a corporate lawyer. Now, he wishes to pursue BCom LLB. His father, Lakhwinder Singh, is running an automobile workshop.

Ananya Chawla of Spring Dale Senior School said 98 per cent marks could not have been possible without the support of her teachers, family and friends. “The happiness is out of this world and I can still feel the goose-bumps. This result taught me that hard work pays off sooner or later. I am planning to pursue the Bachelor of Business Administration for my graduation.” “I would like to thank my school, parents, my brother and friends for being with me throughout this.”