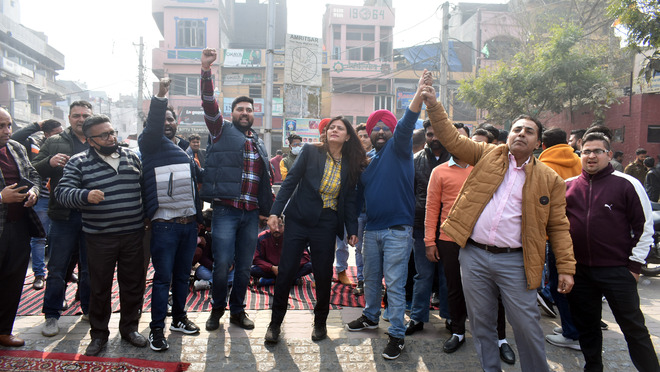 Members of the Amritsar Bar Association on Saturday held a demonstration outside the Rambagh police station alleging that the police had registered a ‘weak’ FIR in connection with a murderous attack on a lawyer.

They were led by former executive members of the association — Lovely Sharma and Raman Chowdhry. They raised slogans against the police authorities and threatened to stage a protest outside the Police Commissioner’s office on Monday in case the police failed to take appropriate action in this regard.

They said on February 12, advocate Rahul Sethi, who is also an executive member of the association, was attacked by a group of persons with sharp-edged weapons. However, the police registered an FIR under weak sections of the Indian Penal Code and did not include sections of murder bid and no accused was arrested till now. They said if the police failed to make necessary amendments in the FIR they would hold a demonstration outside the Police Commissioner’s office.

The police said the medical report of the victim was awaited and appropriate action would be taken after receiving it.