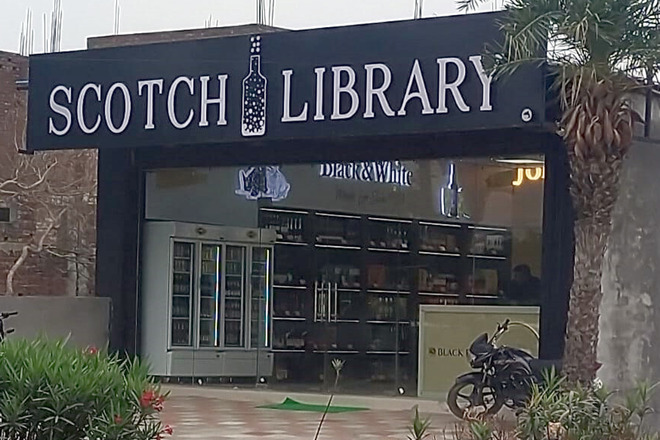 Writers and intellectuals of the city strongly objected to the name of a newly-opened liquor store in front of the Alpha One Mall on Tuesday. The store named ‘Scotch Library’ offended the literati, who feel such a move attaches a negative connotation to the concept of libraries.

Members of Kendri Punjabi Lekhak Sabha, including president, Darshan Buterr, expressed their disappointment over the matter. Prominent writers including Deep Devinder Singh, Dev Darad, Shukarguzar Singh, Kewal Dhaliwal, and others, too, joined the protest against using the concept of library to promote liquor consumption.

“We strongly condemned the move to call a liquor store a library, which otherwise is a place to acquire knowledge and is considered to be a sacred place for books and literature. In an already challenging situation, where the awareness regarding libraries is declining, such a move is completely commercial in intention and nature. Instead of promoting public libraries as places of knowledge and encouraging people to go there, such tactics would instead demean the word and the concept. All the Sahitya Sabhas have demanded the district administration to curb this trend,” said Buterr.

The writer community appealed to the religious and social organisations as well as the Jathedar of Sri Akal Takht Sahib to take notice of this issue.