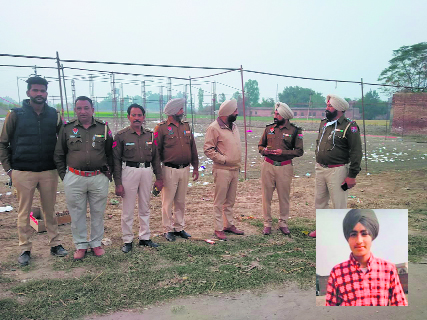 Cops at the crime spot where 17-year-old Anmolpreet Singh (inset) was stabbed to death. Photo: Gurbaxpuri

A love triangle claimed the life of a 17-year-old boy Anmolpreet Singh of Mehmudpur village on Monday. He was accompanying his cousin Gurbhinder Singh, who had come to meet his girlfriend Ninder Kaur, alias Maro, of nearby Bhura Kona village.

As many as eight persons, including two women, have been booked by the Khemkaran police.

The SHO said three more persons were involved in the crime. He said accused Ninder Kaur had an affair with accused Lovepreet Singh of her own village and she was dating Gurbhinder Singh of nearby Mehmudpur village at the same time.

He, in connivance with Maro, made a conspiracy to eliminate Gurbhinder. Maro called Gurbhinder Singh to meet her. Gurbhinder reached the spot with his cousin Anmolpreet Singh on his Bullet motorcycle, while Maro and her sister came on a moped. Gurbhinder and Maro were talking to each other, when they saw Lovepreet Singh Labha and others coming towards them in an Innova from a distance.

Maro and her sister escaped from the spot. Gurbhinder, too, was leaving on his bike, when Labha hit their bike from behind with his SUV. Both Gurbhinder and Anmolpreet fell on the road and the accused stabbed them multiple times and fled from the spot.

Gurbhinder somehow pulled out Anmolpreet from the bike, but he was unconscious. He went to nearby hospital of Bhikhiwind, when Anmolpreet succumbed to his injuries.

The SHO said the accused have been booked under Sections 302, 120-B, 148, 149 and 506 of the IPC. He said the accused were still at large and the police were conducting raids to arrest them.