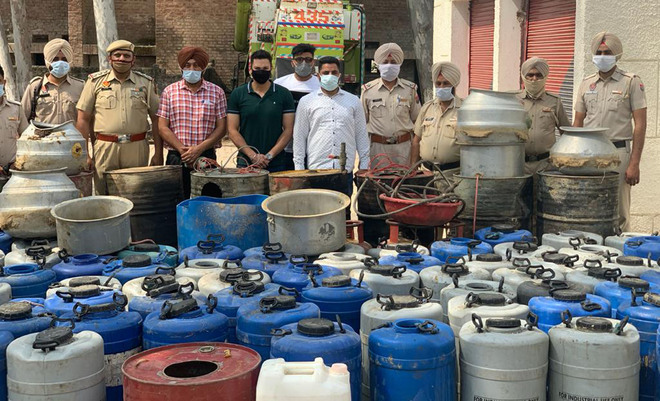 The illicit liquor and lahan seized by the Amritsar rural police from Boparai Khurd village, near Amritsar, on Sunday. Tribune photo

The police confiscated 1.18 lakh kg of lahan (raw material for brewing illicit liquor) besides 390 litres of illicit liquor during the raid. The police also seized 95 drums of 50 litre capacity each, four LPG gas cylinders and 20 tarpaulins from the spot. This is the seventh illicit liquor bust in the past two months.

“The police undertook detailed geographical mapping exercise of the production and supply chains of all illicit liquor units busted by the police in past two months while we are also scrutinising the assets of the accused persons to establish their network of financial flows in order to smash the entire network,” the SSP said.

He added the police were investigating the case from various angles and more such illegal liquor making units were expected to be unearthed soon. A case under Sections 61, 78 (2), 1 and 14 of the Excise Act at the Lopoke police station and the process to forfeit the properties of the accused persons, as per the legal provisions, is underway.

This is the 7th such illicit liquor manufacturing unit busted by the Amritsar rural police in the last two months, which led to the arrest of as many as 38 bootleggers so far. The police have seized 7,54,100-kg lahan, 4061.25 litres of illicit liquor, 57 working stills, 1,830 kg jaggery, 297 drums, 78 tarpaulins, 43 gas cylinders, four water tanks, 62 cans and six motorcycles in these seven operations since March 1.