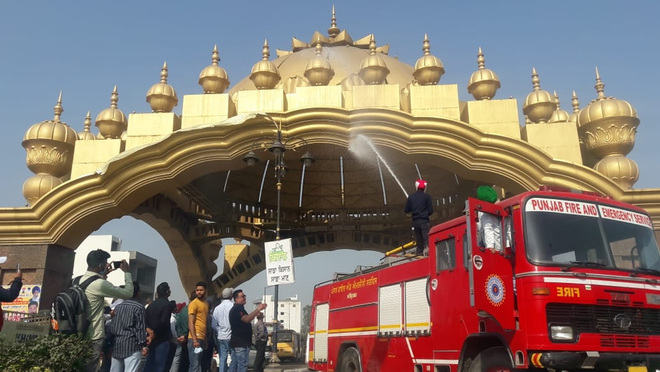 Upset over the poor condition of city’s iconic Golden Gate in Amritsar, the Municipal Corporation staff cleaned it on Saturday.

Upset over the poor condition of the city’s grand entry gate, commonly known as “Golden Gate”, Mayor Karamjit Singh Rintu has taken it upon himself to carry out its maintenance unofficially.

The SAD government had built the grand entry gate for the holy city in 2016 by spending Rs 9 crore. In the absence of any maintenance during the last four years, the gate was losing its sheen with time. Ironically, the lights were lying defunct for several months.

The municipal corporation on Saturday cleaned the golden top and walls of the gate. However, it was day off for the MC employees, but on the call of Rintu, MC employees worked on day off.

A clean-up operation was initiated at Golden Gate this morning. During the operation, Fire Brigade vehicles were used to clean the grand gate. Mayor Karamjit Singh Rintu and Commissioner Komal Mittal along with several officials and employees were present on the occasion

Mayor Karamjit Singh Rintu said Amritsar was a world renowned city for its religious importance. While cleaning the gate, the Mayor and MC officials found that the golden plates had rusted. “We will officially take over the maintenance of the iconic gate,” added the Mayor. The Mayor appealed to residents of the city to cooperate with the MC in keeping the surroundings clean so that the city has a distinct identity for cleanliness.