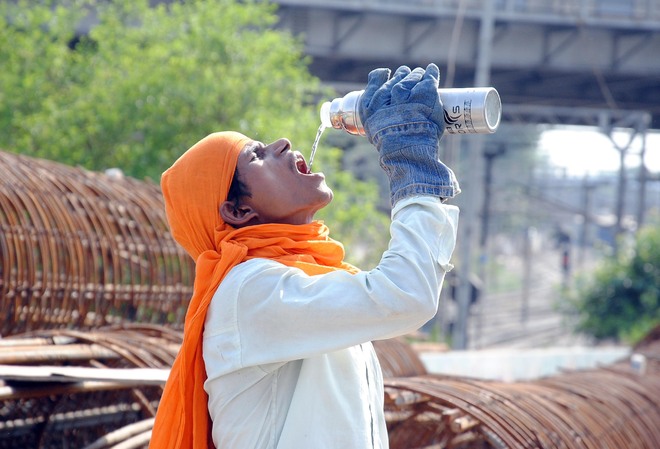 A construction worker quenches his thirst in Amritsar. Sunil kumar

With the temperature hovering around 45° Celsius during the daytime, the heat has become unbearable for residents in the city. There has been a sudden rise in the temperature during the last few days, making people unable to come out of their homes. Even the days are getting longer and the sunlight can be seen till 7.30 in the evening.

With the government already announcing a red alert due to heatwave, health experts have asked residents to take ample precautions and increase intake of liquids. Moreover, one should not step out of the homes in the afternoon (especially from 1 pm to 5 pm). As the intensity of heatwave is expected to increase further, residents are required to take care of small children who might not like to be confined inside the rooms.

Civil Surgeon Dr Jugal Kishore said people should cover their heads while going out in the sun and keep them hydrated. He said lemon water and fruits as watermelon could also help.

Residents say that unprecedented heat at this time of the year makes them wonder summer this year would be harsher. “Until a week ago, the temperature was below normal as pollution had decreased immensely with a limited number of vehicles plying and most industrial units lying closed due to the lockdown. But now it seems that the weather has taken a sudden turn for worse,” said Ranbir Singh, a farmer.

For farmers, who have already started sowing paddy with direct seeding technique, performing their farm-related activities would become even more difficult.