Despite low income, landlords ask them to pay rent or leave 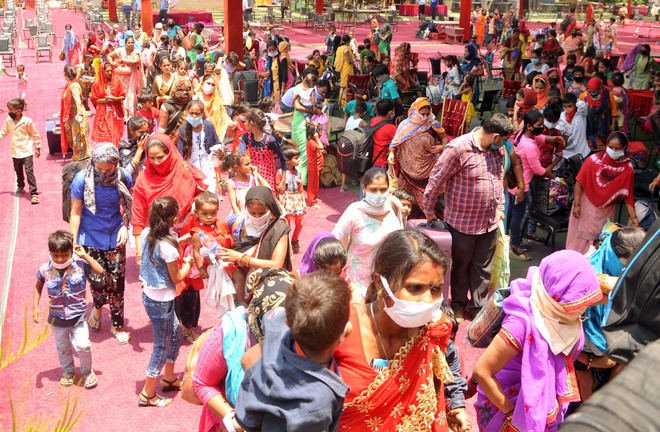 Family members of the migrants line up in scorching heat for their turn in Amritsar on Wednesday Tribune photo: Vishal Kumar

Nazim, working at a textile unit, has become restless. He wants to return to his native town — Rampur in Uttar Pradesh, as his landlord is pestering him to pay the rent, while the income remains unsatisfactorily low.

“I am being paid per piece rate. The income will remain proportionate to the work I do,” he said. After remaining unemployed for nearly two months, the factory started functioning again but has not regained full steam. So, all artisans are not getting enough work to earn a proper living. He is unable to support five members in his family with this income. Now, he has decided to return to his native place as soon as possible.

Dhiraj Pal, another worker at a textile unit, about 30 members living in Dhapai area and working in different units were reluctant to stay back here. He said house and room owners were asking them to pay the rent or leave the accommodation. He said house owners were labourers and vendors who were also grappling with income issues.

Sukhdev Pal, president of the local chapter of Uttar Pradesh Kalyan Parishad (UPKP), accepted that the migrants were being pressurised to pay rent. He said factories resumed operations, but the amount of work being received did not require full staff. He said it was better to send migrants back and they should return when markets regain.

He said the Railways introduced only one train Saryu Yamuna to UP and Bihar from the Amritsar railway station. He said the seats in the train were already booked for a month. So, the Union Government must introduce more trains to UP and Bihar and facilitate their early return.