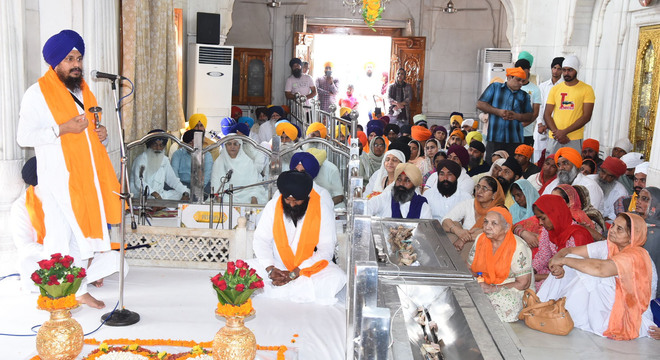 The SGPC on Monday held a religious congregation to celebrate the occasion of Miri Piri Diwas of Patshahi Chhevin, Guru Hargobind Sahib, at Akal Takht.

After the culmination of bhog of Sri Akhand Path, the hazuri raagi group of Bhai Harbhinder Singh of Golden Temple connected the sangat (devotees) with Gurbani Kirtan and Bhai Sultan Singh offered prayer (ardas). After reciting the holy hukamnama, Giani Jagtar Singh shared the history of Miri Piri Diwas and encouraged the sangat to follow the path shown by the Guru.

“The path through Miri Piri shown by the sixth Guru connects the community with spirituality as well as to protect the oppressed. The voice of Miri Piri from Akal Takht resisted the tyranny of the oppressive government. Akal Takht has always been challenged by the rulers/governments,” he said.

The jathedar appealed to the Sikh community to adhere to this honourable doctrine of the Guru and adopt Bani and Baana (Gurbani and traditional Sikh attire) and to uphold Gurmat (teachings of Sikh gurus) traditions and customs.

During the function, the historical Miri and Piri kirpans (swords) adorned by Guru Hargobind Sahib at Akal Takht were also shown to the sangat.

Prominent personalities were honoured with siropas (robe of honours).