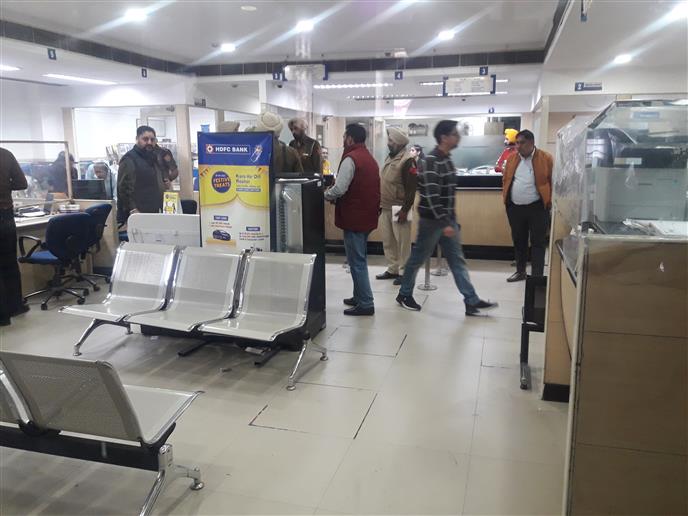 Two armed robbers, one in a police uniform, robbed Rs30.65 lakh from the local HDFC Bank branch on Saturday at gunpoint.

The bank is situated on Jandiala Road, which is one of the busiest roads in town, and is exactly opposite the residence of local MLA Dr Dharambeer Agnihotri, where the police are deployed round the clock.

Bank Manager Harwinder Singh Sandhu said one of the robbers who was in police uniform trespassed the bank premises and instructed all bank employees and customers to gather at the corner. He warned that in case anybody dared to raise an alarm, he would be shot dead.

The other associate of the robber remained outside the bank on his bike.

The robber who entered the bank premises reached the cash counter which was open. He put the cash in his bag and both escaped towards the Khalsapur Road.

DSP Barjinder Singh said the police are checking the CCTV camera of the bank, in which the masked robber who trespassed the bank has been captured. He expressed hope that it would help the police in its investigation. He said the security guard of the bank had no weapon and he remained a mere spectator.

The robbery raises questions regarding the police vigil as they failed to nab the robbers at any naka installed at all entry points of the town. The police have registered a case under relevant sections of the IPC and Arms Act.