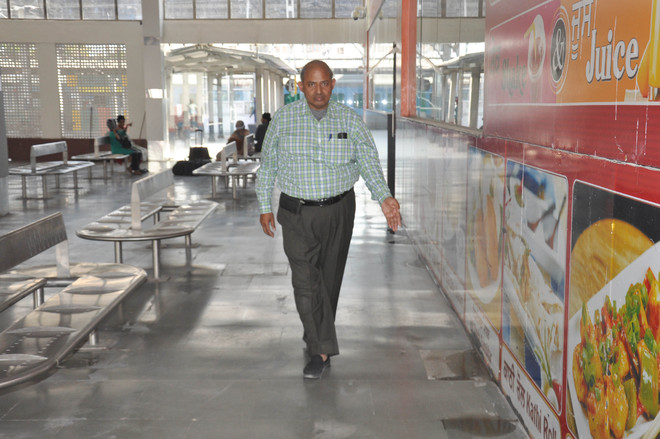 City based architect Raj Kumar Aggarwal was the one who had originally designed the models of Jallianwala Bagh at Amritsar Railway Station on Wednesday. Photo. Sunil kumar

Amritsar: City-based architect and civil engineer Raj Kumar Aggarwal claims that he is the person who had originally prepared the model of the Jallianwala Bagh in the 1970s. What pains him the most is that the model has not been spotted at the Amritsar railway station after the development and reconstruction work started there over seven years ago. “Then railway minister Kamlapathi Tripathi was quite impressed with the model, which was made in the ’70s.” An architect, engineer and artist of caliber, his hands create and convert scrap into models which attract visitors to the city. He loves art works as paintings and making sculptures is his hobbies. He was only 20-years-old when he had prepared a working model (replica) of the national memorial of freedom struggle — Jallianwala Bagh — from trash. The model was installed in the main waiting hall of the Amritsar railway station in 1979. His grouse is that he was in his 20s when the model was placed at the local railway station but he was kept away from the function to deny him recognition. “Since I was an apprentice at that time in the railway workshop, Amritsar, his officers took the credit and hogged the limelight for his achievement,” he said. That was a thing of the past. Now, they have misplaced the model itself. It caused me pain. In the early ’60s, Raj Kumar had won a number of awards for paintings and art projects during his school days. He was felicitated by eminent art personalities of his time, including late SG Thakar Singh. His painting depicting the scene of 1919 Jallianwala Bagh massacre was displayed in a chamber of the Punjab Vidhan Sabha, Chandigarh, in 1994. Another famous model prepared by him is of Durgiana Mandir, which was installed at the arrival hall of Sri Guru Ram Dass Jee International Airport in 2014. The model is prepared with gold-plated metal sheets and is placed on a four-foot high pedestal of white marble. His other famous models are New Amritsar Cantonment and Galliara beautification scheme for the beautification of the surroundings of the Golden Temple. He spends a lot of time in social work being a member of the Shri Durgiana Committee, Institute for Blinds, Red Cross Soicety, Aggarwal Free Hospital, DAV College of Education, Chairman of Institute of Valuers, Amritsar Branch, president of Architects/Engineers Practitioners’ Association, Amritsar. — Neeraj Bagga