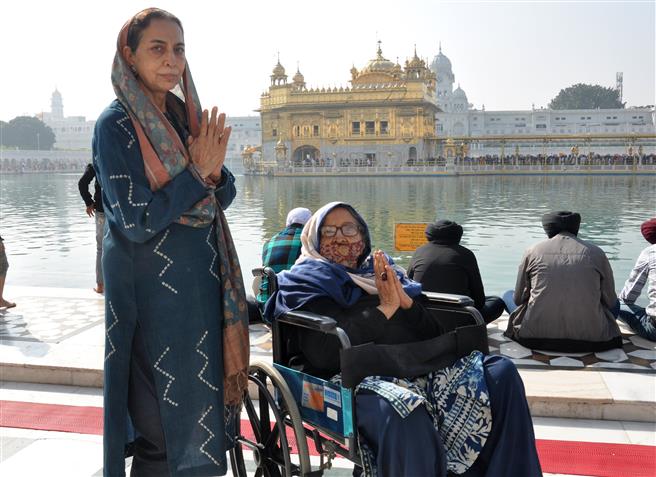 Artist Arpana Caur with her mother Ajeet Caur at the Golden Temple in Amritsar on Monday.

An artist who believes in compassion, is unassuming in her life, but insightful on her canvas, Arpana Caur, was in Amritsar to receive the Honoris Causa degree at GNDU for her contribution in the field of visual arts.

Accompanied by her mother — Ajeet Caur, the Padma Shri writer who is a defining force in Punjabi literature, Arpana relived some of her childhood memories as she visited the Partition Museum, Jallianwala Bagh and the Golden Temple on her brief stay in the city.

“Coming to Amritsar involves a lot of emotional weight, as it is Guru ki Nagri and both my mother and I are deeply connected with the city spiritually,” she said. The artist has extensively painted Guru Nanak Dev and donated three pieces of art done in marble at Sultanpur Lodhi on the 552nd Prakash Purb. Last year also, she donated a painting of Guru Nanak to the Indian Academy of Fine Arts. She has donated a painting of Guru Nanak Dev in meditative pose to GNDU as well. “The three sculptures at Sultanpur Lodhi have been made of marble, which is my way of paying tribute to Baba Nanak. While one is a hand holding a mala, another is an impression of his feet or khadanwan and the third a rabab. I used all my resources to create them, and after three years of persuading the state government, finally a month ago they found their place at the museum in Sultanpur Lodhi,” she said.

Caur’s visit to the Partition Museum with her mother was an emotional one. Ajeeth Caur was a survivor of the Partition and her testimony is displayed at the museum’s audio-visual gallery. “My mother was 13, when the news of Partition broke. My grandfather was a doctor and a prominent one in Lahore. When he used to shut his clinic, freedom fighters used to hold meetings there. My mother had also been jailed for a day as a 13-year-old. When the news of Partition broke, our family had to travel for 45 days to cross the border and one of my grandfather’s friends, Ujjal Singh, who was the uncle of Khushwant Singh, too, travelled with them. My grandfather brought only Guru Granth Saheb from Lahore, when he came to India and we still have that at our house. We read from it every single day,” she shared.

Having grown up listening to the stories of Partition from her mother, Arpana later also painted Bhagat Singh and Udham Singh in 1997.

“I always felt that contemporary Indian artists at the time had never really painted Bhagat Singh. I also painted Train To Pakistan, as I used to have dreams as a child of blood-soaked trains crossing borders,” she said.

Caur is currently working to curate art work for the Bihar Government at the museum being set up at Patna Saheb. For someone who likes quietude, both Arpana and Ajeet Caur found the pandemic-induced lockdown as ‘normal’.

“I believe artists and writers generally lead a quiet life. So, ours did not change much that way during the pandemic. My mother used to run a vocational school for underprivileged girls that had to be shut down. But she kept busy hosting literary events for SAARC writers virtually. We also run a free public library and cultural centre in Delhi, where over 300 miniatures that we own have been displayed,” she said. Having an aversion to technology, Arpana confessed that she does not own a smartphone and both of them don’t even know how to open a computer. “I can’t get used to technology. I prefer replying with pen as a preferred mode of communication and do not find it strange, though others do, sometimes,” she replied.