On Monday, shops on left side of roads were allowed to open in Amritsar 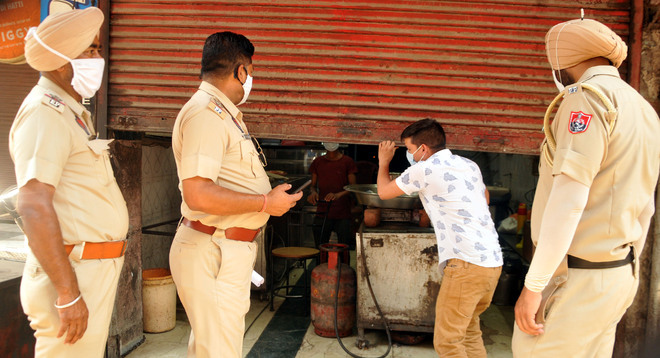 Police personnel ask a shop owner to pull down the shutter.

On the first day, shops on the left side were open and those on the right remained closed. Though some confusion prevailed in some areas of the city, police personnel and members of trade bodies tried to clear it.

Surinder Duggal, president of the local unit of the Punjab Pradesh Beopar Mandal, admitted that there was some confusion about the opening of shops in different areas but it was cleared after the intervention of the mandal and other trade and market associations. For example, all shops inside the Pink plaza market were open as there were no shops on the other side. The matter was resolved and the shops would open on alternate days.

He, however, expressed dissatisfaction at the way the district administration and the police tried to manage chaotic conditions in some parts of the city. “There was a chaos on the Circular Road stretch between the Ram Bagh Gate and the Hall Gate. People gathered around handcarts to buy fruit and vegetables and all shops were open.” He called Dr Sukhchain Singh Gill, Police Commissioner, urging him to take steps like deploying more patrolling parties to control crowds.

On the other hand, a majority of fruit and vegetable sellers were seen going about their businesses without wearing masks. Even residents were not serious about this one of the major safety protocols.

SK Wadhwa, an industrialist who deals in winter material, appreciated the government and the administration for their efforts to make businesses run by allowing shops to open on alternate days. He said the manufacturing of goods was severely hit by the surge in Covid-19 cases and travel restrictions.

“During the April-June period, orders are booked for the winter material. Entrepreneurs from Jammu and Kashmir and Himachal Pradesh visit the holy city during this period. However, travel restrictions are in place in both states and they cannot come here,” said Wadhwa.

Industrialists are also facing problems while transporting commodities like green tea, tea, medicines. A pharmaceutical trader said a truck of medicines (sent by him) had left the city on April 30 and it delivered the goods today (on Monday) in Kashmir valley. “Can we do business if goods take such a long time (12 days) to reach their destinations?” he rued.

Since the market today opened after two days of curfew, there were snarls due to a huge rush on some roads.