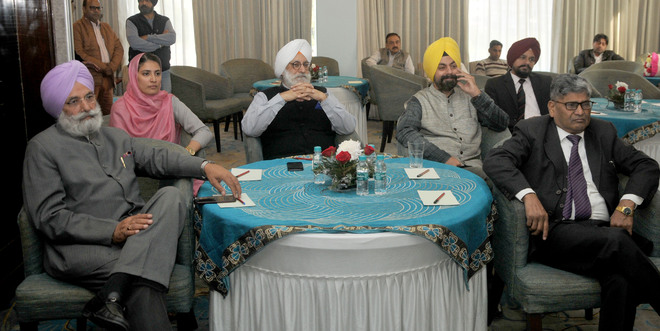 Prominent personalities from the city during an interactive session with The Tribune Editor Rajesh Ramachandran in Amritsar on Saturday. Tribune photo

The Tribune started an interactive programme in Punjab from the holy city by reaching out to readers, with Editor Rajesh Ramachandran meeting city’s prominent personalities in the fields of education, health, environment, politics and art and culture here on Saturday.

While the Editor informed the readers about the changes made in the newspaper content from the journalistic point of view, the latter were eager to know about his take on social media challenges for the newspapers. Many among the readers expressed concern about the lack of interest in reading newspaper among youngsters as they prefer the Internet.

Speaking on the occasion, Rajesh Ramachandran said: “Journalism is under scanner in current times. Journalism has not changed but the platform has changed. Today, the print media is also competing with social media platforms. We are not just competing with fellow journalists but also with the common man, who is on social media and can become a channel for news discourse. The fact that every major newspaper has launched its digital news platform also raises concern as we are letting our own print editions down by giving access to free news online.”

Ramachandran also discussed the dilemma being faced by the newspaper industry of whether to go behind a paywall in context of the digital news portals. “Almost every major global newspaper has gone behind a paywall and restricted the access to free news. That’s one big concern all papers are facing in India as well,” he said.

The readers also appreciated the changes in the newspaper made recently, especially it brought on board many senior bureaucrats as columnists. They stated that knowing the truth about important happenings from the persons who were at the helm of affairs during a particular event gave a most authentic and firsthand account. The readers appreciated several key features like additions of graphics, increased coverage of business news and inviting expert guest columnists. They also appreciated coverage of global economic and political issues and their analysis by experts in foreign policy.

The Tribune’s e-paper was lauded by the participants for being accessible and reader-friendly. “Your e-paper is good and its reach out is quite high among the NRIs. The quality of editorial and Oped pages too has substantially improved and the paper’s stance is quite objective and upfront about current issues,” said Gunbir Singh, president, Dilbir Foundation, and former chairperson, CII, Punjab chapter. The event was also attended by Punjab Medical Education and Research Minister Om Parkash Soni.

The readers also expressed concerns over the fact that reports of slogan shouting, mudslinging and trivial issues were being given prominence in papers. The prevalence of fake and paid news was also discussed. They pointed out that most papers were apparently biased, but lauded the role of The Tribune for staying on the right track.

Replying to readers’ queries on yellow journalism in the present era, Ramachandran said such things were always there. “While The Tribune reported a true account of the Jallianwala Bagh massacre, the civil and military gazette of the time published another account, which was completely contradictory,” he said, adding that credibility was most important aspect of any newspaper.

The Tribune Editor also quoted international instances to substantiate how newspapers, which were expected to become extinct because of the Internet, had made a comeback in the US and other countries. He expressed concern over people being divided into echo chambers who were not ready to listen or read the viewpoint of others.

What they had to say?

Of all the newspapers coming at my home, my first pick is always The Tribune. In my opinion, its authenticity is major USP. What is written in this paper carries a lot of weight. And that’s what makes me read The Tribune. Bikram Singh Majithia, SAD leader

The Tribune has been a good source of memories. I still have newspaper cuttings collected when I was in Class III. It is good to see the paper achieving new milestones and holding on to the highest of journalistic ethics. Arwinder Chamak, General Secy, Indian Academy of Fine Arts

It (The Tribune) is in our veins. Punjabi taste and culture are reflected in it. At a time when the credibility and authenticity of media is under question, this paper holds on to high moral standards. Dharminder S Rataul, ex-journalist and Under Secy, Khalsa College Charitable Society

At the district library, we get maximum requests for The Tribune. For readers of all age groups, the paper holds a special regard. For readers, anything published in it is treated as truth. And this respect is increasing by the day. Dr Prabhjot Sandhu, In-charge, District Library

News carried in the paper is authentic and most reliable. The paper should give more prominence to local happenings, especially achievements at the national level. The recent changes in the paper are a welcome step. Jaspal Singh Sandhu, Vice-Chancellor, Guru Nanak Dev University

The newspaper and its journalists hold high moral standards. From my personal experience, I can say that the paper’s journalists stand apart due to their integrity and honesty. The issues of poor people find prominence in it. Amarjit Asal, District Secretary, CPI

The coverage of the state has improved. In Punjab, everybody who knows English loves it. The paper has a history of standing with the nationalistic movement in the pre-Independence times. Rajinder Mohan Singh Chinna, Senior BJP leader

The coverage of city areas connects readers with the paper in a big way. I have been a keen reader of the paper for the last many decades and have found that it caters to a variety of readers. Sudarshan Kapoor, Chairman, DAV Managing Committee

The Tribune has always been a front-runner in taking up issues whether these concern the state, business, or other aspects. It is also the most reliable source of information, especially in northern states. Suneet Kochchar, ASSOCHAM (Punjab) chairman and director of Khanna Paper Mills

The Tribune is the first choice of journalism students and for others who aspire for a career in civil services. We have seen lots of improvements  in it in recent times and hope it would cater to the needs of students in a better way. Dr Amanjyoti Kaur, Head, Department of Journalism, Khalsa College

The Tribune e-paper is among the best. People from across the world, especially NRIs, read its epaper for authentic and unbiased information on day-to-day happenings. The quality of Oped articles too has improved. Gunbir Singh, WWF for Nature, Punjab Chairperson

Readers like positivity in its news. We, as psychiatrists, often encourage our students to quote articles from The Tribune in their research dissertations. The newspaper coverage is based on truth, besides being unbiased. Dr PD Garg, former head, Psychiatry at GMC

The Tribune highlights good works being done by social organisations. One thing I feel strongly about the paper is positivity of the content. While we find so much negativity on most media platforms, it stands for hope. Dr Rakesh Sharma, Prof Surgery at GMC and patron of NGO Voice of Amritsar

The newspaper is doing wonderful service and reading it is part of our daily lives. But at the same time, I feel that local news items should be prominently displayed on the national and state pages, besides the local editions. Dr Pushpinder Walia, Principal, BBK DAV College