No solution in sight to land dispute at Khawaspur village 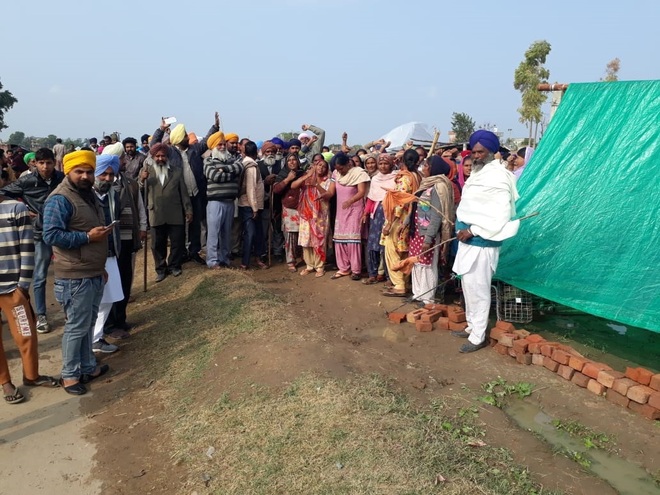 Dalit families gather to oppose the police and the district administration at Khawaspur village.

The controversy over possession of land in Khawaspur village, 20 km from Tarn Taran, has become a bone of contention for the administration. While the village sarpanch claims that the land (measuring 21 kanals and 8 marlas) belongs to a village family, Bhupinder Singh Bittu, a senior Congress leader, is of the view that it is the common land and the village panchayat is the owner of the land.

Bittu says that as many as 120 Dalit families had been allotted the land decades ago. Many of the families have constructed their ‘pucca’ houses on it while others have pitched temporary tents. The issue became more serious a month ago when the village sarpanch, a right-hand man of Khadoor Sahib MLA Ramanjit Singh Sikki, tried to get the land vacated from the families. Then Bhupinder Singh Bittu came to the aid of the Dalit families. On the other hand, he was booked for molesting the woman who claims to be the owner of the controversial land. The police do not arrest him, though he is available in the village leading the Dalit families.

Ravinderpal Singh, DSP, Goindwal Sahib, said the Duty Magistrate did not have the orders to get the land vacated from them. The issue has exposed internal conflict in the ruling Congress party. Bhupinder Singh Bittu was the district president of the AAP before the Lok Sabha elections held this year and joined the Congress party during the elections.

A right-hand man of Jasbir Singh Dimpa, MP from Khadoor Sahib, Bittu did not share cordial relations with MLA Ramanjit Singh Sikki. Sources said the internal conflict in the ruling party was the reason behind the issue not being solved.

Principal’s special affection for his school

Gurmej Singh Randhawa, Principal of Government Secondary School, Bath, has special affection for his school for which he always wants to do something extraordinary. He wants to provide the students with all possible facilities, particularly girl students. His charity works have exhorted many donors to contribute more than Rs 20 lakh for the development of the school in the last two years. Nestle, a known private limited company in the milk products sector, has installed a big RO system for drinking water in the school.

Besides, it has also constructed a separate toilet block for girl students. The Principal has built a smart classroom for students. His sincere efforts have provided a better academic atmosphere in the school. School staff members too have donated for the development of the school.