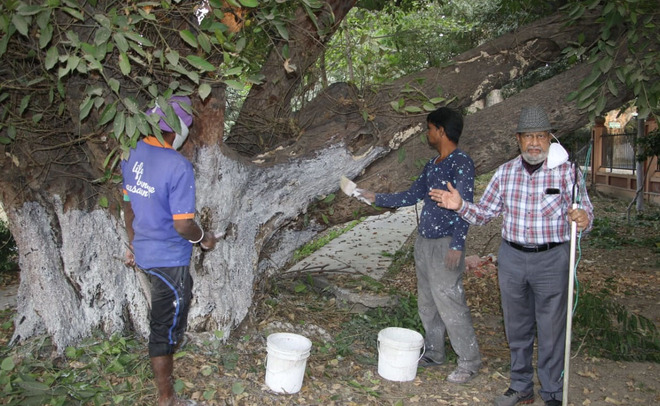 Noted environmentalist Parkash Singh Bhatti and his men have started the treatment of trees at the historic Ram Bagh, the summer palace of legendary Sikh ruler Maharaja Ranjit Singh.

Khudai Khidmatgaran, an NGO which Bhatti heads, was also involved in treating trees at various parts, including gardens, in Amritsar. Many trees have decayed and fallen due to fungi and termite attack while authorities concerned have yet to wake up.

Most of the heritage trees, located in the precincts of the historic garden popularly known as Company Bagh, are facing extinction. The historic garden has a century-old ‘mushakapur’ tree. Thanks to the apathetic attitude of the authorities concerned and the municipal corporation, the age-old tree has dried up due to fungi and pest attack.

Bhatti said the Geeta Sewa Samiti and the Sukhmani Sewa Society were two other organisations which were helping his organisation in the cause. The garden has many rare varieties of trees and a number of them date back to nineteenth century.

Environment lovers point out that these trees on the sprawling landscape are also part of the heritage of Summer Palace. “In fact, many such historic gardens in various parts of the country are preserved beautifully in their original shape. But the authorities are indulging in mindless concretisation of green wealth,” said Dr Rakesh Sharma, an environment lover. Besides the MC, the Punjab Heritage and Tourism Promotion Board and the Archaeological Survey of India (ASI) are two other custodians who were involved in the preservation of the historic structures of the park. Kulwant Singh Ankhi, patron of the Amritsar Vikas Manch, said, “It is the duty of the MC to maintain the landscape of the sprawling complex.”

While pest attack was one of the major reasons behind the drying up of trees, the presence of rodents is also leading to tilting and falling of trees. Another major reason was mindless excavation of earth from the bagh in order to ‘protect’ the heritage buildings in the garden which are being preserved after spending huge amounts.

The digging exposed the roots of trees leading to their weakening. MC Commissioner Komal Mittal, along with a battery of officials, had visited the garden a couple of days ago and assured that they would provide all kind of help to save trees.