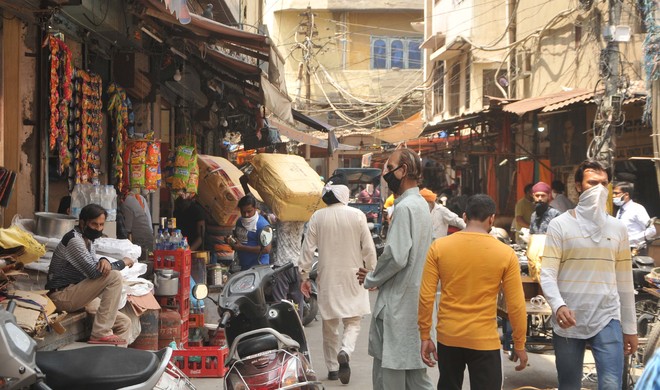 A heavy rush of people at Thali Sahib Bazaar in Amritsar on Thursday. photo: Vishal Kumar

The district administration abolished the "coding system" to open shops and allowed traders to open shops from 7 am to 6 pm here today.

The move to open all shops is on a trial basis amid the Covid-19 threat.

Earlier, the administration had adopted the coding system and marked shops with codes A, B and C. There were some markets which were allowed to open their shops with the "left-right" system.

Shopkeepers used to open their shops twice a week which leads to heavy rush in shops. Office-bearers of the Punjab Pradesh Vyapar Mandal were demanding to allow opening of the shops as shopkeepers were facing a financial crisis. The retailers were not getting the supply of goods as wholesale markets were closed.

"We are paying full salary to workers but opening shops only two days a week. Moreover, there is no restriction on the movement of the public. People gather in the shops and violate the norms. Hence, it is better to open the shops with safety measures,” said Ravi Mahajan, a shopkeeper.

Shops are opened on a trial basis. If shopkeepers follow guidelines, then the decision will be continued in coming days," said Sukchan Singh Gill, Commissioner of Police.