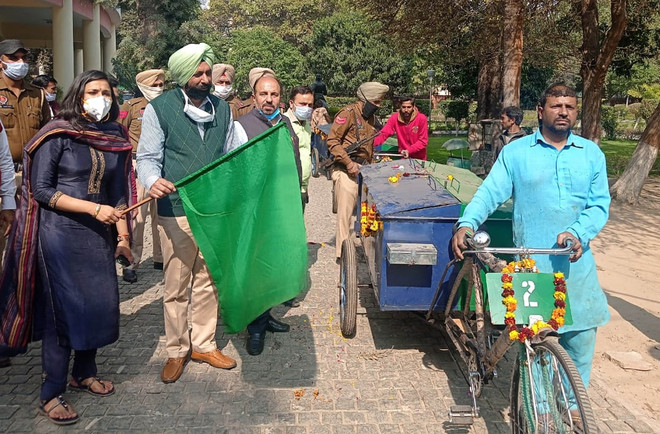 Mayor Karamjit Singh Rintu and Municipal Corporation Commissioner Komal Mittal handed over 56 new rickshaws to ragpickers, who willcollect garbage from the inner city of Amritsar under the Smart City project. Apart from this, five special rickshaws were flagged off to make the sanitation system more comfortable in the area around Darbar Sahib.

These rickshaws have separate bins in which wet and dry waste will be kept separately. The rickshaws will be used to collect garbage from door-to-door in the narrow streets. The residents of six wards of the central assembly constituency and four wards of the south assembly constituency in the walled city would be benefited with this effort of the MC.

On this occasion, Mayor Karamjit Singh said that these rickshaws had been started to solve the problem of garbage collection in the narrow lanes and markets in the interiors of the city. Through which, the garbage will be picked up from door-to-door and every shop from the narrow streets and crowded markets of the city. The cleanliness of the inner city will be improved with this effort. “Amritsar city is a historical city, where lakhs of devotees come daily to visit religious places located in the inner city, so it is very important to keep the city clean. New machinery worth crores of rupees has been installed on the roads to streamline the sanitation system. In addition, road sweeping machines have also been introduced. Employees of the Municipal Corporation are also working day and night to maintain cleanliness”, said Rintu.

The Mayor appealed to the residents of Amritsar not to throw their garbage out in the streets and markets and it should be dumped in the bins or when municipal vehicle arrives in their street.