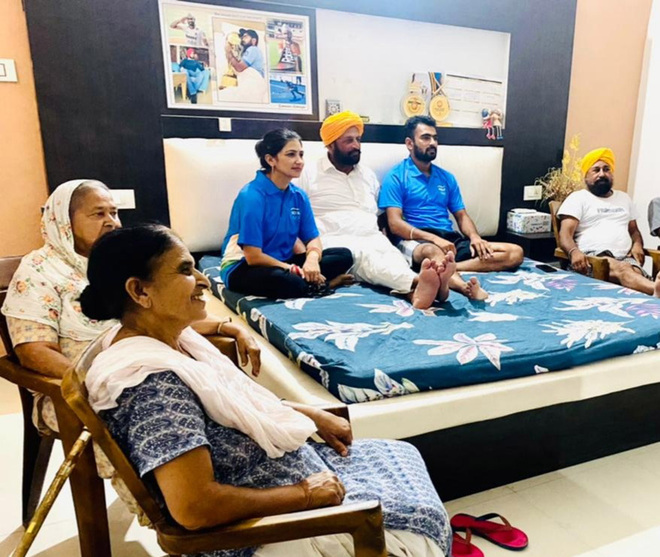 The five players from the Majha region in the Indian team have made their presence felt in Tokyo. The feat has put their obscure native villages on the global map.

Simranjeet Singh belongs to Gurdaspur’s Chahal Kalan village whereas the four from Amritsar district are Gurjant Singh of Khaliara village, Harmanpreet Singh of Timmowal village, Dilpreet Singh of Butala and Shamsher Singh of Attari. Simranjeet (25) and Gurjant (26), both cousins, played together in the team.

It was Simranjeet who opened the account of the team with a field goal and interestingly, sealed the victory with the winning goal against Germany. His paternal uncle Rashpal Singh Chahal said: “At a very young age, he was dedicated to hockey. I got him admitted to Shahbad Hockey Academy, followed by Surjit academy in Jalandhar.”

Gurjant’s father Baldev Singh said both the players got inspiration from their uncle Hardev Singh Chahal who was also a national hockey player (1985-1990). “Both cousins played many tourneys, including the 2016 junior World Cup, together. We are proud of their achievement,” he said.

At Timmewal village, Harmanpreet's father Sarbjeet Singh said his inspiration was former dragflicker Jugraj Singh, who taught him tricks of the trade. "Harmanpreet gained the attention of the school coach at the age of nine. His coach inspired me to let him take professional training. I managed to spare money for his training through my meagre resources,” he said.

At Butala village, Dilpreet’s father Balwinder Singh said : “We are loaded with congratulatory messages and frequent visits by relatives. We are all proud of Team India,” he said. However, the atmosphere at Shamsher's home at Attari was sombre due the sudden demise of a member in the family.