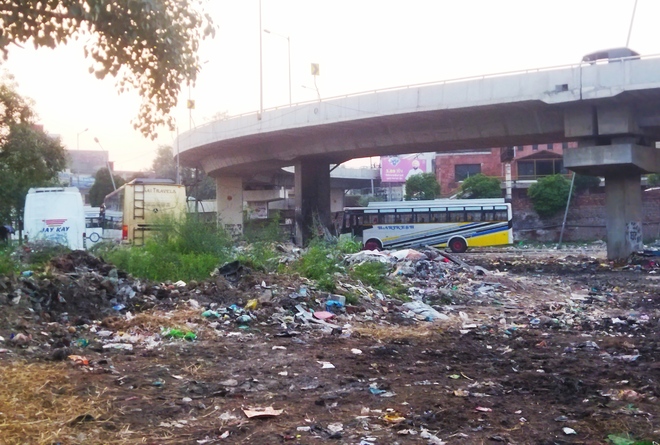 A view of trash and filth in the old sabzi mandi outside Hall Gate in Amritsar on Sunday. Photo. Sunil kumar

The trash and filth in the old Sabzi Mandi outside the Hall Gate belies tall claims of cleanliness by the civic body here. Heaps of garbage, leftovers, rotten fruit, accumulation of debris and slush caused by various spells of rain during the monsoon can be noticed all over its prime land.

Gurmeet Singh, who daily commutes over the road to pay obeisance at the Golden Temple, says the Hall Gate is the main road leading to the holiest of Sikh shrines. Most of the VVIPs, VIPs and tourists pass the gate to reach the Golden Temple and Jallianwala Bagh. So, maintaining abandoned land of the old Sabzi Mandi should be a priority. Piles of garbage are not only an eyesore but also pose a threat to the health of people. Such places become a breeding-ground for mosquitoes and flies.

Nishant Kumar, a trader, says that a well-maintained road passes through the abandoned Sabji Mandi, which offers a shortcut between the Hall Gate and Gha Mandi. “At times, I prefer this stretch over the maddening traffic rush of Rambagh Road.”

Sandeep Singh, Superintendent Engineer of the Municipal Corporation Amritsar (MCA), said over five acres of prime land belonged to the Punjab Municipal Infrastructure Development Corporation (PMIDC). “As per the norms, the MCA can only maintain it,” he said, adding that slush over its kutcha surface would be removed. A proposal has been dispatched to the government to replace its surface with good earth and the moment the fund arrives, the work will be undertaken.