Over 3K appear for NEET in Amritsar 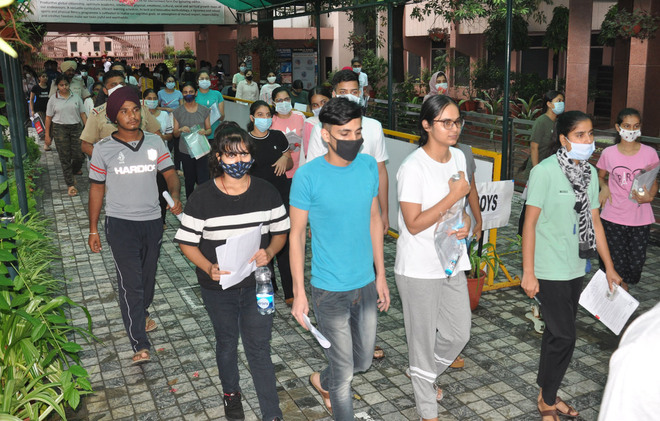 Students come out of an examination centre after appearing for NEET in Amritsar on Sunday.

Amid rain, over 3,000 candidates appeared for the National Eligibility Entrance Test (NEET-2021) held at seven centres in the city on Sunday.

A majority of the students felt relieved that the examination was not postponed again.

Rihan Kaur, a student, said there were only two questions in chemistry that were tricky, while the rest in botany, zoology, and physics were from the syllabus.

Anmol Bajwa, another student, said though they were wearing masks, the centre also had a provision of providing masks. Though the examination was held from 2 pm to 5 pm, they were asked to appear at the centre three hours before the start of the examination due to Covid-19 restrictions. Fifty students were allowed entry in a staggered way in the half an hour gap, he said.

Each student was asked to come with a bottle of at least 50 ml sanitiser, a transparent bottle of water. All examination centres were cleaned and surface, including furniture, sterilised with sodium hypochloride.

Uttamjit Singh, a botany teacher, observed that unlike last year, when the examination was postponed for a record four times in the wake of Covid-19 pandemic, this year it was postponed only twice. “So, students were saved from the undue harassment of waiting for a long period for the examination,” he said, terming the paper as balanced, which contained questions drawn from the syllabi.