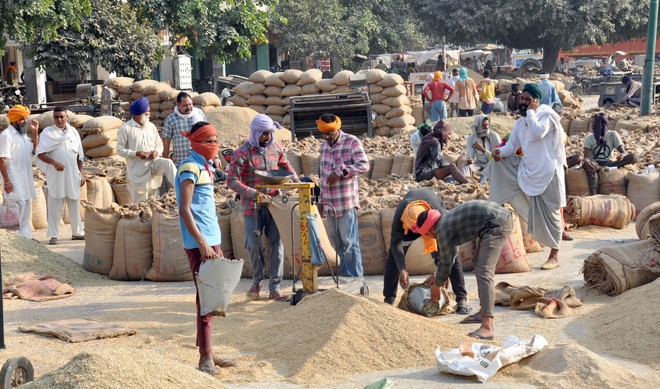 Labourers fill gunny bags with paddy at the Bhagtanwala mandi in Amritsar on Sunday. Sunil kumar

With the government advancing commencement of paddy procurement, the district administration has made arrangements for the exercise at 71 grain markets in the district. The procurement was earlier planned to begin on October 1.

However, the harvesting of paddy crop in the district is yet to pick up the pace. Most of the 1,377 MT of paddy varieties arriving in grain markets in the district has been procured by private players. An official of the Mandi Board said at present, only those farmers who have to sow vegetable crops have started harvesting paddy. “The crop is not fully ripened and there is high moisture content,” he said. While the government procurement guidelines require moisture content to be below 17 percent, private players usually purchase the crop with higher moisture at a lower price.

Meanwhile, at a meeting with officials of procurement agencies and the Mandi Board, Deputy Commissioner Gurpreet Singh Khaira has asked them to ensure Covid-19 safety guidelines were followed in grain markets.

He also directed the Sub Divisional Magistrates to visit mandis in their respective areas and keep a tab on the procurement. He said the MSP of Rs 1,888 per quintal has been fixed for A-grade paddy. Khaira said farmers should bring fully ripened crop with moisture below the permissible limit, so that they do not have to wait for long to sell their produce.