Purpose of exhibition is to educate youth about the lost tradition: Organiser 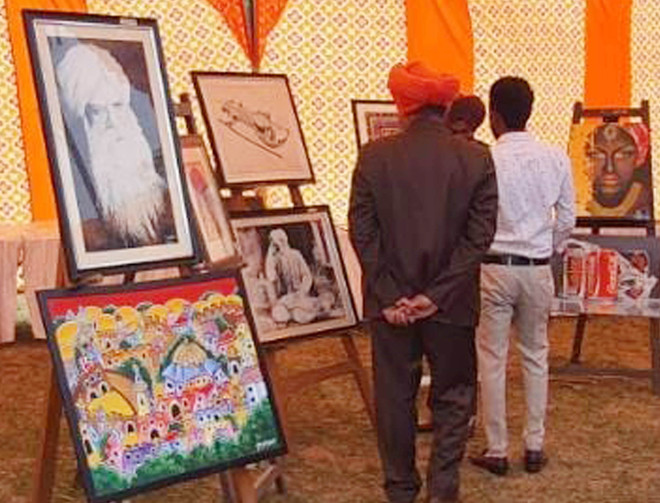 Artworks on display at an exhibition at Khalsa College in Amritsar.

The aesthetics and the literature exhibition at the ongoing 6th Amritsar Literature Festival at Khalsa College added the much-needed fervour to the event. On display today were a collection of wood carvings, classical musical instruments and artwork by the students associated with Naad Pargas. The exhibition attracted youngsters, mostly students, who took time off their examination schedule to visit the exhibition.

Aman Inder, organiser, and one of the members of Naad Pargas, said the art exhibition was one of the features of the annual literary festival. The display included musical instruments including drupad rabab, Afghani rabab, tanpura, taus, saranda, sarangi and pakawaj. With a history that sets back to the time of Bhai Mardana, who immortalised dhrupad rabab, it was invented by the sixth Sikh master, Guru Hargobind. Later, Guru Gobind Singh modified it into a lighter form — Dilruba. Even Saranda was invented by the fifth Sikh master, Guru Arjan Dev. While many of these instruments are still being used for Gurbani and kirtan, the shift towards more modern instruments have cast a shadow on the intangible heritage items.

“The purpose behind organising the exhibition is to educate the youth about lost tradition and aesthetics of the Punjabi culture. It includes art, literary material and musical instruments. We have displayed traditional Punjabi classical instruments that are used in folk and other Punjabi classical forms. Not many youngsters are aware of such traditions as instruments have now been overshadowed by digital synchronisers,” he said. The displayed instruments have been sourced from folk artists, who have had them in tehri family for generations. “Some of them have also been given by members of Naad Pargas,” said Aman.

The wood works featured at exhibition included abstract sculptures and religious art work made by fine arts students from city. Despite the lure, the footfall this year remained low.