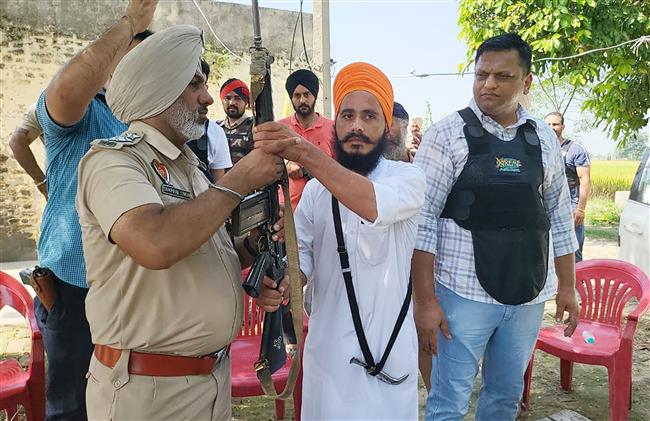 Jaswinder Singh hands over the SLR to a police officer.

Peeved over alleged police inaction on a complaint filed by him, a person created a ruckus by snatching the self-loading rifle (SLR) of an on duty security guard at the Dhariwal police station. He also threatened the entire staff of “dire consequences” if his grievances were not immediately redressed.

From the moment he entered the police station and till his arrest a couple of hours later, Jaswinder Singh of Gurdas Nangal village, 4 km from Dhariwal, made sure he was live on a social media site.

Today morning, around 8.30 am, he told officers present at the police station that he was “distressed because no action was being taken on a complaint made by him against some fellow villagers a fortnight ago.”

Just as he was talking to some junior officials, he noticed that a security guard standing next to him had left his SLR unattended. He quickly grabbed it and warned all that he would “not hesitate to fire if his problem was not sorted out then and there.”

Jaswinder escaped in his car and started driving towards Kahnuwan.

Meanwhile, somebody from inside the police station informed SSP Deepak Hilori. The SSP, fearing that Jaswinder could indulge in indiscriminate firing, was quick to put his men into action. The staff at the Kahnuwan police station was informed. Subsequently, the police started a chase to nab him. Half an hour later, Jaswinder reached a tubewell near Kot Dhandal village and again started dictating terms. Scores of cops reached the site and placed themselves at strategic positions. He was asked to surrender by DSPs Sukhpal Singh Sukhwinder Singh. On his part, Jaswinder was adamant that he would give up only in the presence of the media and advocates. Even as some local reporters and lawyers were making their way to the tubewell, the cops made him surrender the SLR and overpowered him. He was later taken to the CIA police station in Gurdaspur.

SSP Hilori confirmed that an FIR under Sections 307 (attempt to murder), 392 (robbery) and 353 (obstructing a public servant from discharging his duty) had been registered.