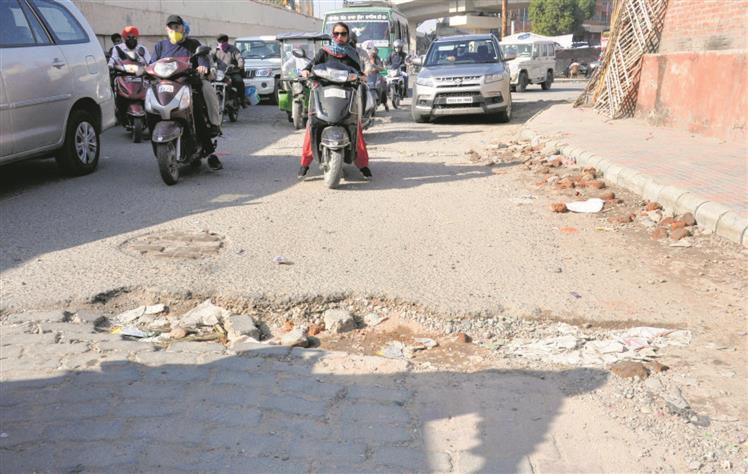 The road outside Hall Gate is full of potholes. Photo: Sunil Kumar

It seems like the ambitious Smart City project is moving at a snail’s pace. Although facades at particular places in the city have been given a facelift but repairing of broken roads is so slow and tardy it bespeaks that authorities’ initiative is still a far-fetched plan.

Take for instance the stretch from outside the Hall Gate to the Ghah Mandi via Ram Bagh chowk, it needs to be looked at immediately as potholes are abounding here.

It is really dangerous and needs urgent repairs. The commuters can drive safely and the durability of the road will also increase. Thus, the department need not invest in laying it again.

From two-wheelers to heavy-duty vehicles, the road witnesses dense traffic every now and then. Yet, it does not figure in the priority list of the concerned government department. Mahesh Mahajan, a shopkeeper, said the stretch was in deplorable condition once it starts from the Bhandari railway overbridge. “Fast moving vehicles coming down from the overbridge are likely to bump into these potholes, which accelerate the disintegration of the road.”

As one moves towards Rambagh side the numbers of potholes increases after turning towards Ghah Mandi from Ram Bagh chowk.

Rajwiinder Singh, a motorist, adds a word of caution, “It is really dangerous and needs urgent repair. The commuters can drive safely and the durability of the road will also increase. Thus, the department will need not invest in laying it again.”

Karamjit Singh Rintu, Mayor, said the concerned wing of the Municipal Corporation (MC) would be asked to do the same soon.