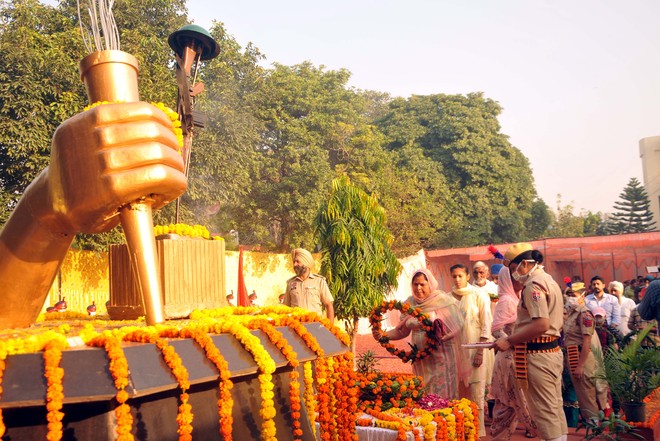 Relatives of slain Punjab Police personnel lay wreaths during an event to mark the Police Commemoration Day at a rural police station, near Amritsar, on Thursday

Rich tributes were paid to the martyrs of the Police Department and paramilitary forces on the Police Commemoration Day, which was observed at the Amritsar Police Lines and Amritsar Rural Police Lines on Thursday. Police Commissioner Dr Sukhchain Singh Gill and IG Border Range Manish Chawla presided over the respective functions.

After laying the wreath in memory of the martyrs at a memorial in Amritsar Police Lines on Lawrence Road, the Police Commissioner said during September 2020 to August 2021, as many as 377 cops and jawans and officials of the paramilitary forces, including two policemen of the Punjab Police, have laid down their lives in the line of duty.

“Police Commemoration Day is celebrated all over the country to pay rich tributes to those who laid down their lives in the line of duty in the state police and paramilitary forces. The day is celebrated after 10 CRPF jawans were martyred on October 21, 1959, in Ladakh, while patrolling at the Indo-China border,” Dr Gill said.

He said as many as 119 officials and jawans in the Amritsar Police Commissionerate were martyred during the black days of terrorism.

Among others who were present included veteran BJP leader Laxmi Kanta Chawla, Deputy Commissioner of Police Parminder Singh Bhandal and Joint Police Commissioner D Sudarvizhi. Besides other police officials of the city police, members of the martyrs’ families also participated in the programme and laid wreaths at the memorial.

Earlier, ACP Gurinderbir Singh Sidhu read out the names of martyrs. Later, saplings were planted to mark the occasion. The Police Commissioner also heard the grievances of the family members of the martyred soldiers.

The cops and family members of the martyrs observed a two-minute silence to mark the occasion. Chawla said the Punjab Police have been facing many challenges. They made many sacrifices during the peak of militancy in Punjab and successfully eliminated terrorism. He said being a border state, the police were working diligently to face challenges such as cross-border terrorism, drug smuggling, drug abuse and gangsters. While pointing out that law and order cannot be maintained without the help of common people, he urged residents to help the Police Department.

Policemen who sacrificed their lives while on duty were paid rich tributes at a parade organised at the police lines on Thursday on the commemoration day.

Brave policemen who laid down their lives during the times of terrorism while performing their duties were remembered for their supreme sacrifice.

A two-minute silence was also observed.

The SSP redressed the grievances of the families of the martyred policemen.