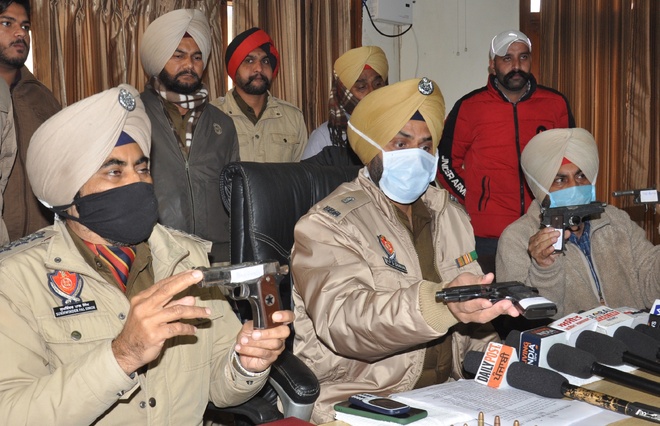 Police officials show the weapons recovered from the suspects, who shot dead Abhishek Singh on January 1, in Amritsar on Sunday. sunil kumar

With the arrest of three criminals, the Amritsar Rural police on Sunday solved the murder case of Abhishek Singh (19), who was gunned down by armed assailants on January 1. Abhishek was shot dead for his alleged affair with the girlfriend of a drug trafficker and notorious criminal identified as Kishan Singh.

Besides Kishan, the police have arrested Baljit Singh, alias Bulli Jandiala, who is considered a close aide of notorious gangster Jaggu Bhagwanpuria and Sukhwinder Singh alias Kaddu, all residents of Sheikhupura Mohalla falling under Jandiala police station. Two of their accomplices identified as Gurbhej Singh and Happy Jatt were yet to be arrested.

Victim’s brother Akashdeep had stated that Kishan was suspicious that Abhishek Singh was having an affair with his girlfriend. The victim had a quarrel with Kishan, Baljit and Happy Jatt a few days ago over the issue. He said the accused killed his brother at the behest of Happy Jatt. A case under Sections 302 and 120-B of the IPC and Sections 25, 27, 54 and 59 of the Arms Act has been registered against them.

He said Bulli Jandiala was also associated with Vicky Bhatti of Nanaksar Mohalla in Tarn Taran who was an accused in Jandiala Guru gun house dacoit case. He had four different cases of murder, murder bid, robbery, arms and the NDPS Act at Amritsar, Tarn Taran and Kartarpur. Similarly, Kishan had eight criminal cases while Sukhwinder had around four cases against him.