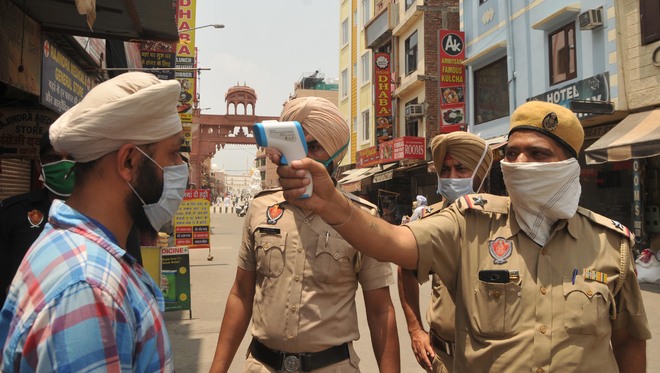 A policeman checks body temperature of a Sikh devotee as he arrives to pay obeisance at the Golden Temple on Thursday.

With a majority of the cases coming from the congested walled city area, the city police have decided to enforce more stringent measures, at least for a week, to contain the spread of Covid-19.

According to the police, residents of the walled city area were not abiding by the government guidelines, forcing the police to adopt a tougher stance. “It was seen that residents of the old walled city were caring two hoots to the instructions related to maintenance of social distancing norms and wearing of mask, which are essential to controlling the spread of the deadly virus,” said Jagmohan Singh, the Deputy Commissioner of Police (Law and Order) while talking to The Tribune.

On the other hand, residents pointed out that owing to its old topography, there were congested lanes in the old city, making if “difficult” for them to maintain social distancing. Markets in the area are located in the congested lanes and there are many roadside eateries, too, they said.

As per Health Department reports, nearly 1,000 positive cases were reported in the holy city and a majority of them came from the walled city. Many areas were declared as containment zones in the old city. Besides positive case, the death toll due to Covid-19 virus has crossed 44 in the district.

The district administration has been appealing to the people to wear masks and maintain social distance to flatten the curve of the coronavirus as there was no treatment available.