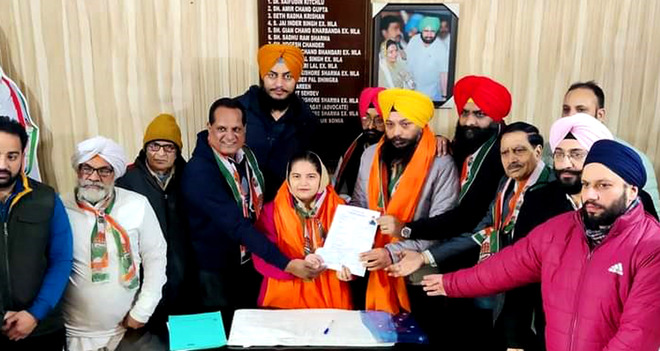 A SEA OF TICKET SEEKERS Aspirants for Congress ticket for Ward No. 37 submit their applications at the district Congress president Jatinder Sonia’s office in Amritsar on Sunday. Tribune photo

Though the party tickets are yet to be announced for the by-election to Ward No.37 of the Municipal Corporation, political activities have started picking up pace with the polling scheduled to be held on February 15. The post of councillor of Ward No.37 fell vacant after the death of Harpreet Singh on April 30, 2019. Aspirants of various parties are presenting their claims for the party ticket.

Jatinder Sonia, the district president of the Congress, received six applications. Kulwant Singh, father of Harpreet Singh Goldy, also presented his claim for the ticket. According to sources, he is a strong contender for the Congress party ticket.

Some other aspirants such as Paramjit Kaur, Harmeet Singh Matharu, Udhahy Singh, Amarjit Singh Joda and Gagandeep Singh Sehajra also submitted their applications for the party ticket. Senior leaders of the Congress would conduct scrutiny on January 17 and it was being expected that the ticket would be announced on 18.

During the SAD-BJP alliance, the seat used to be in the SAD quota but now after a split between the two parties, the BJP is fielding its candidate separately for which three aspirants have already submitted their applications to the party office.

Apart from political parties, there are chances of independent candidates. The area of Ward No.37 lies along Sultwanwind Road.