After getting absolute majority by the ruling Congress candidates in the Patti Municipal Council and Bhikhiwind Nagar Panchayat election results, which were announced on February 17, the aspirants for the post of president have started approaching the ruling party bosses. It is also clear that local MLA of the ruling party will play an important role in formation of the chief of Patti and Bhikhiwind civic bodies.

In Bhikhiwind Nagar Panchayat poll, the Congress won 11 of the 13 wards. All 13 elected are new faces. The SAD nominees won from two wards. Congress MLA Sukhpal Singh Bhullar will play main role in selection of the candidate for the top post. The ruling party will select the candidate keeping in view 2022 Vidhan Sabha election. Hindus are majority in Bhikhiwind town. Political observers say Rajinder Kumar Sharma (ward number 4) is the first choice of MLA due to his proximity to the leader. Moreover, he is a local businessman and is available all the times in the town. However, Billa Chopra, husband of Rekha Chopra, who won from ward number 13, claimed that his wife is also in the race for the post of president. 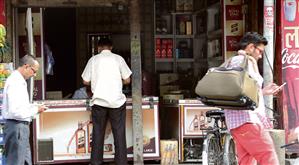